Sir Gawain and the Green Knight: 2 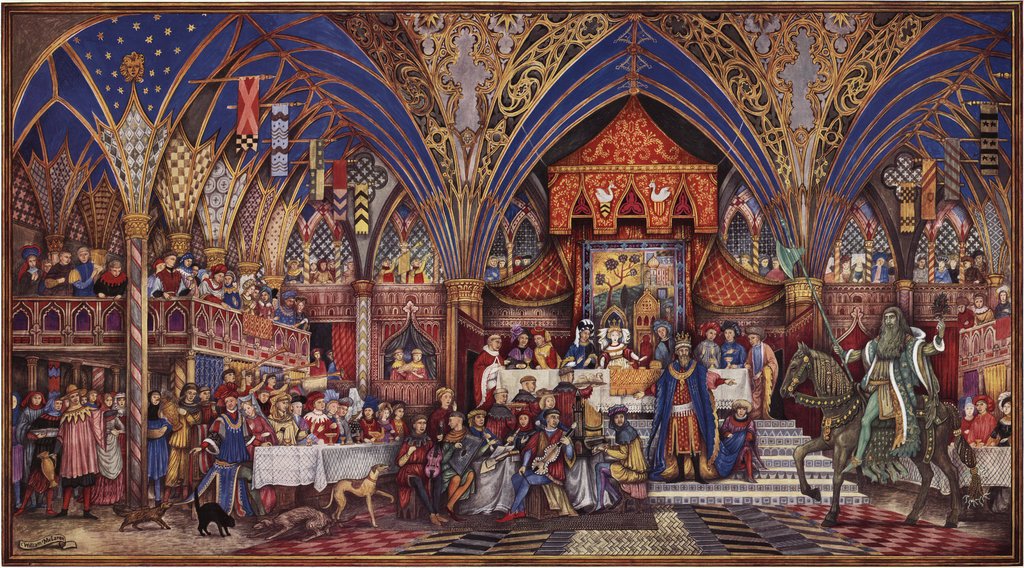 All the visitor wants is to play a little “Christmas game” — but it appears that no one at Arthur’s court wants to play with him. Perhaps that’s because he is enormous and green.

a fearful form appeared, framed in the door:

a mountain of a man, immeasurably high,

a hulk of a human from head to hips,

so long and thick in his loins and his limbs

I should genuinely judge him to be a half giant,

or a most massive man, the mightiest of mortals.

But handsome, too, like any horseman worth his horse,

for despite the bulk and brawn of his body

his stomach and waist were slender and sleek.

In fact in all features he was finely formed

no soul had ever seen

a knight of such a kind —

(It’s hard to get the “bob and wheel” — the short lines that end each stanza of the poem — to render accurately in HTML. In general, HTML is not made for the presentation of verse. Sorry.)

The knight clearly resembles the Green Man of European folklore, a kind of vegetation deity whose attitude towards humanity is ambiguous — he can be generous, he can be threatening. It is interesting, and perhaps relevant to this poem, that the Green Man is often represented in medieval churches, often as a stone carving, and sometimes in quite colorful form, as in this roof boss from Rochester Cathedral: 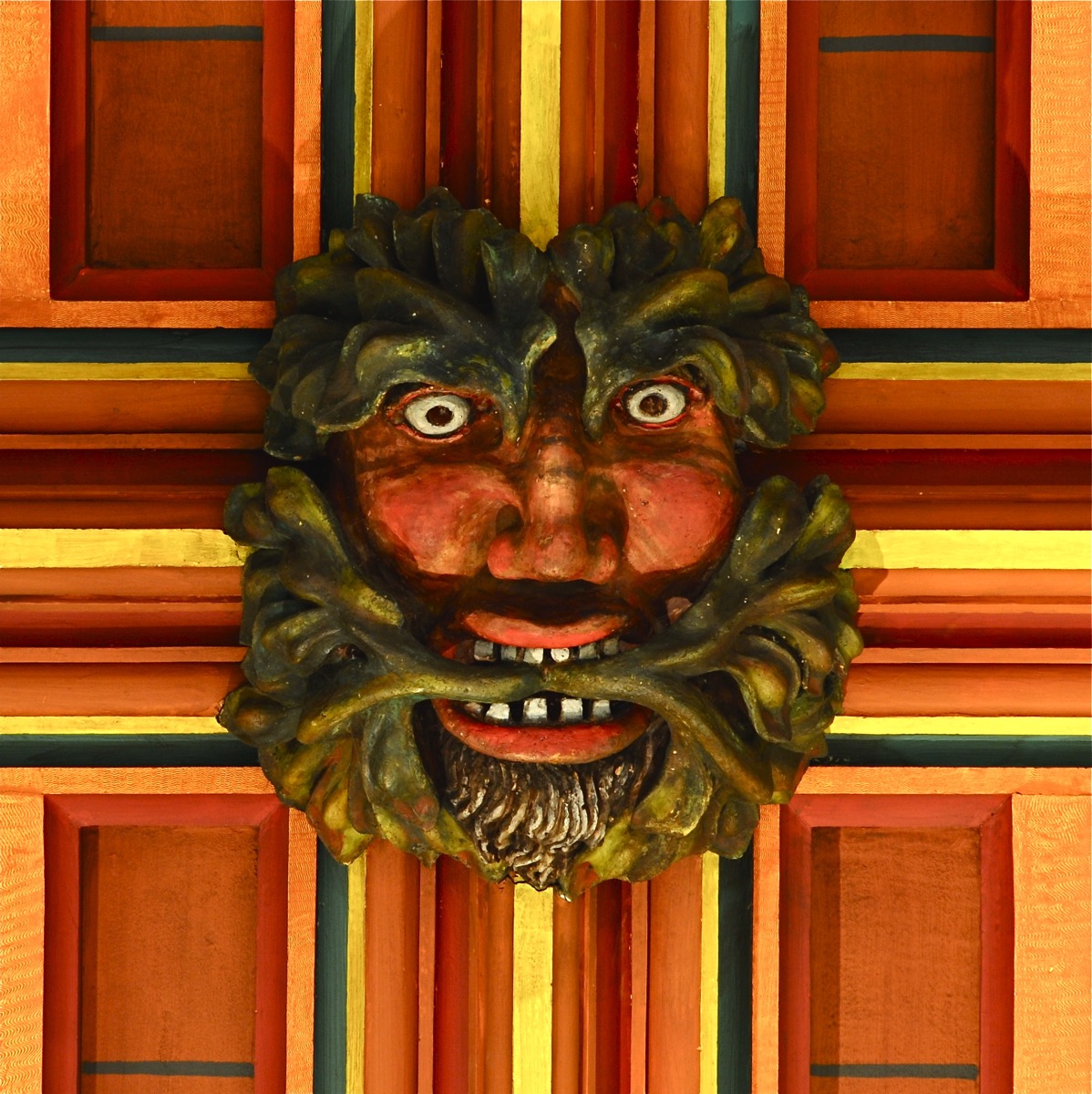 Or maybe it’s the particular game he offers that’s the problem: for he carries with him a massive axe, a “gigantic cleaver,” and he suggests that one of Arthur’s knights should take it and chop his, the Green Knight’s, head clean off — and then, he says, in a year and a day he’ll return the favor.

No one steps up to volunteer — until, in the embarrassed silence, King Arthur himself does. This event could be read as a token of Arthur’s courtesy and courage, and surely there’s an element of that; but aren’t the knights sworn to protect and serve their liege lord? Should they not be interposing themselves between their king and this terrifying stranger?

Only when Arthur offers himself does one knight, Gawain, acknowledge that the whole situation is rapidly becoming humiliating:

For I find it unfitting, as my fellow knights would,

when a deed of such daring is dangled before us

that you take on this trial — tempted as you are —

when brave, bold men are seated on these benches,

men never matched in the mettle of their minds,

never beaten or bettered in the field of battle.

I am weakest of your warriors and feeblest of wit;

loss of my life would be grieved the least.

Were I not your nephew my life would mean nothing;

to be born of your blood is my body’s only claim.

Such a foolish affair is unfitting for a king,

so, being first to come forward, it should fall to me.

This is throwing some serious shade on all the other knights, who (if he speaks true) are all more powerful and/or wiser than he. But none of them moves a muscle. So forward Gawain steps and takes the axe.

The Green Knight tells Gawain to search him out in a year — to seek a place called the Green Chapel, where he will wait for Gawain. However, Arthur whispers to Gawain that if he gives the fellow’s neck a truly serious whack, he won’t have to worry about what might happen in a year. Sage counsel; so Gawain lifts the “gigantic cleaver” high and lops the visitor’s head clean off. Problem solved!

The handsome head tumbles onto the earth

and the king’s men kick it as it clatters past.

yet the man doesn’t shudder or stagger or sink

but trudges towards them on those tree-trunk legs

and rummages around, reaches at their feet

and cops hold of his head and hoists it high,

and strides to his steed, snatches the bridle,

still gripping his head by a handful of hair.

Then he settles himself in his seat with the ease

of a man unmarked, never mind being minus his head!

He then reminds Gawain of his obligations, bids everyone farewell, and rides away, leaving them to contemplate the great feast that’s growing cold on their plates.

Merry Christmas to all, and to all a good night!