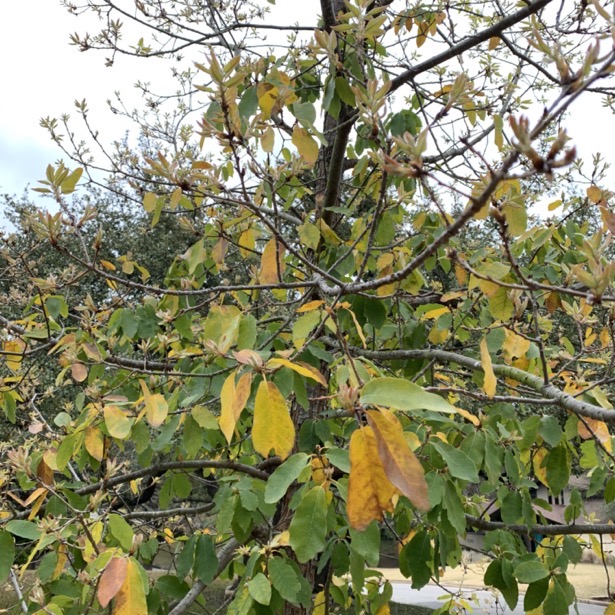 We planted this Monterey oak in our front yard three years ago, and it has flourished, but it has this really odd behavior: Each early spring it starts putting forth new leaves and discarding old ones at the same time. Live oaks behave similarly, but more gradually and less obviously. (Though two years ago I thought one of our live oaks was dead because in March it had not a single leaf on it. Then, two weeks later, it was full of new leaves.)

An interview with Richard Powers::

The modern human assumption that trees, plants and all other wildlife are “just property” is, to Powers, the root of our much greater species problem. “Every form of mental despair and terror and incapacity in modern life seems to be related in some way to this complete alienation from everything else alive. We’re deeply, existentially lonely.

“Until it’s exciting and fun and ecstatic to think that everything else has agency and is reciprocally connected we’re going to be terrified and afraid of death, and it’s mastery or nothing.” To that end, Powers hopes his book will be part of the restoration of a tradition that has all but ceased to exist in modern literature. “We are incredibly good at psychological and political dramas, but there’s another kind of drama – between the humans and the non-humans – that disappeared in the late 19th century, once we thought we had dominion over the Earth. Because we won that battle.

“But now we know we didn’t, actually. And until you resolve that question, how do we live coherently at home on this planet, the other two kinds of stories are luxuries.”

As American cities expanded during the Gilded Age, city planners pushed for tree-lined streets and leafy parks as public health measures. In overcrowded tenement districts where heat could be deadly, trees cooled the air. Today, researchers are discovering that urban dwellers who live near and among trees have healthier babies, display better cognitive functioning, and report less stress—no small matter when 80 percent of Americans live in and around cities. City trees and woods—which clean the air, cool urban heat islands, and capture stormwater runoff—can and should play a more important role.

The American Scholar: In Our Urban Greenery – Jill Jonnes

The art of Victoria Crowe, whose amazing work I just discovered.

Simplicity Of The Complex (by jasontheaker)

There is no shortage of places in Manhattan where visitors can spend the night. Luxury hotels offer lavish suites that can run thousands of dollars, and youth hostels have beds for as little as $20. At least one flophouse survives on the Bowery. And, of course, there is couch-surfing — countless travelers bunk with old friends or near-strangers for little more than an owed favor.

Cory and Dana Foht have taken another route. On some 20 nights over the past two months, the Fohts, 25-year-old twins from Florida, have climbed about 25 feet up the side of a tall American elm tree in Central Park, stretched nylon hammocks between its branches, unrolled sleeping bags and, with a few acrobatic moves, squirmed into their makeshift beds.

‘It’s kind of like its own ecosystem up here,’ Cory said one recent night as he lay in his hammock. ‘You’re definitely aware that you are sleeping in something and attached to something that’s alive.’

In Central Park, Finding a Bed Among the Trees – NYTimes.com

a huge tree in Lushan (by shenxy)