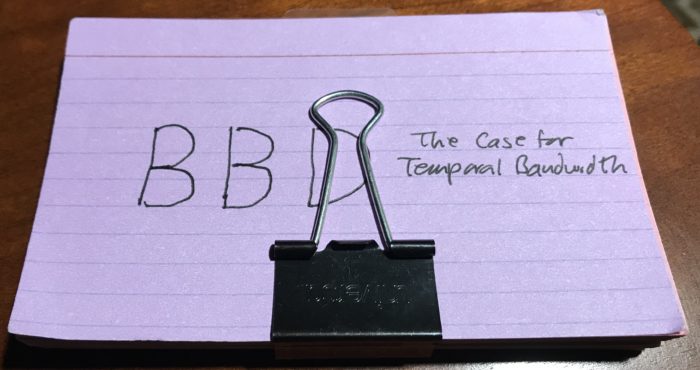 Over the last few years I have adopted, with increasing confidence and pleasure, a new means of organizing my research. For my most recent book and the one I’m working on now, I have developed a version of Niklas Luhmann’s Zettelkasten system, and it it by far the best system of research-based note-taking I’ve employed.

For a long time I hesitated to try the Zettelkasten system because I believed that Luhmann depended on a single system, a single collection of cards that ramified and extended indefinitely. Now, that may not be strictly true, but it was certainly his ideal. And I felt that I had come upon the Zettelkasten model too late in life to adopt it. It would have been wonderful if I had learned about it when I was 30, or even 40, but in my fifties? Too late.

So I thought. But ultimately, when I was working on The Year of Our Lord 1943, I realized that the demands of my research — trying to track the thought and writing of five figures working in complete isolation from one another — called for something like a Zettelkasten system. (It would take a long time to explain why, but it had to do with cross-referencing ideas that were related to one another in a variety of ways: by author, by date, by theme.) Well, I thought, why not have a collection of Zettel that is based not on a lifetime of research but on a single project? So I tried that. And it worked wonderfully.

Now I’m back to work on another book, and again I’m finding Zettel the best way to keep track of quotes and ideas. Don’t Zettel for less than the best, is what I say!

Just a random note before I go further, from Wiktionary:

That’s an interesting history, no?

One of the best things about making Zettel is the ability to go back to an old card and add related cards. So if I make a note about Barbara Tuchman’s idea of history as a distant mirror, I can make a note on that, and label it BBD26. (BBD because this project is called Breaking Bread with the Dead.) And then when I come upon a fascinating essay by Daniel Mendelsohn that treats the Aeneid as a kind of “distant mirror” of our own time, I can add a card to that effect and label it BBD26a. And if later still I have a further thought about Mendelsohn’s essay I can add another card and label it BBD26a1; or, if I want to return to the “distant mirror” theme but with reference to a different text, I can label that card BBD26b. And then if I realize that some other card already in my stack treats a similar theme, I can add cross-references at the bottom or on the back of the relevant cards. (This is not quite how Luhmann numbered his cards but it’s what I like to do.)

I could of course use any number of apps to build a digital Zettelkasten, and indeed I have tried, but paper cards work much better for me. I like keeping my text editor in full screen mode in front of me and then arranging the relevant cards around the computer. I like sifting through the pack and being reminded of things I wasn’t looking for (Luhmann thought this proximity to serendipity one of the most important features of his system.) I enjoy “building a deck,” as it were.

And then, when I’m done with this project, I can put all the cards in a box with my other cards, most of which, by the way, are about the books I teach rather than those I write. (Whenever I am preparing for class I make notes about the themes and passages I want to explore on index cards.) By the time I retire, from teaching and writing alike, I’ll have a pretty interesting collection of cards. Nothing like Luhmann’s, but interesting. Something to look over between sips of my well-earned single malt….