American Airlines rejects my reality and substitutes its own

Yes, this is a kind of rant, but it’s also something more: an account of how transcendentally weird air travel can be these days.

A few days ago my wife and I were scheduled to fly on American Airlines from Dallas to Charleston. But our flight, which was to leave just after 11am, was delayed and delayed and delayed, and when we were told that our plan couldn’t be repaired and a new plane had to be found, Teri and I decided to see if we could be rebooked on another flight, the AA rep at the gate said that neither she nor anyone else at the airport could help us (!?) — we would have to call AA’s toll-free number. So, around 1pm, we did, and here’s what the customer service rep told us: “I can’t help you because your flight is already in the air.” I said, “I’m sitting here at the gate with maybe a hundred other people waiting for a new plane.” “I’m sorry, your flight is already in the air. It departed at 12:53pm.” And then she hung up. That’s when I took this screenshot of my just-updated AA app: 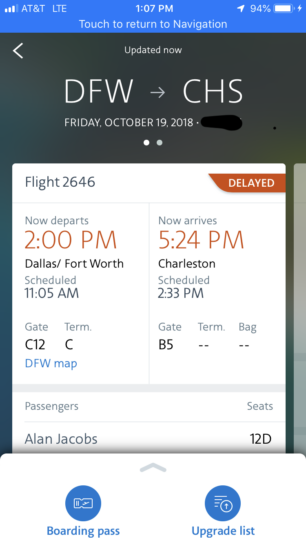 At this point we were at a loss, but as more time went by and there was no sign of a plane, we decided to give up and go home. Then each of us got busy seeking a refund (Teri’s return flight was different than mine, and her fare was purchased separately.)

Today I got an email from AA reading thus: “In fact flight AA2646 was only delay for 14 minutes before taking off on October 19, 2018. I would not be able to offer a refund for the ticket or waive the change fee.” Wait, 14 minutes??? Even the person who insisted that the flight was already in the air at 1pm thought it had just taken off, nearly two hours late.

Apparently no one in customer service at American Airlines has even remotely accurate data about the status of their flights. Moreover, that data seems to be in constant flux.

Well, maybe someone does, because about an hour before I got that email here’s what Teri got:

So, though we were booked on the same flight, hers was either cancelled or delayed so long that she got a refund, while mine was only 14 minutes late. Proof of the multiverse hypothesis, I guess?

But I’ll tell you this: I ain’t flying American Airlines again.