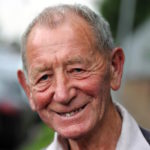 Burial in Bradford of the “Jesus Man”:

A local man, Michael Kerrigan, penned a poem for the funeral, A Touch of Jesus, which he read from the pulpit. The Rev Sandra Benham, the vicar of Baildon, the Bradford community where Brindley was known to spend time in a shared house, said: “What can we learn from him? He was a constant witness, always there come rain, shine, snow or hail. He had time for people, he was never in a rush, not caught up in our frenzied world. He simply walked, waved and smiled.”

There was an outbreak of spontaneous applause as Brindley’s coffin was borne out of the cathedral bound for a private cremation. Earlier, the congregation sang Jerusalem, which seemed hugely apt for a man whose feet had walked, if not quite since ancient time but certainly an impressive number of decades, not only on England’s mountains green but among Bradford’s dark satanic mills, exuding smiles, kindness and an air of agreeable mystery.