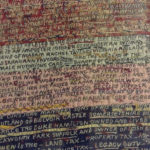 Centre for Material Texts: “At the centre of the exhibition were two truly extraordinary stitched texts … by a woman called Lorina Bulwer, who was an inmate in the ‘lunatic wing’ of the Great Yarmouth workhouse for several years at the beginning of the twentieth century. During her time there, Bulwer covered each of these three-metre lengths with densely embroidered text in which she expressed feelings of anger and frustration. Both pieces are made up of brightly coloured cotton fabrics stitched together, with a wadded lining and a backing fabric, like a quilt. Each individual letter is stitched through all of these layers. Writing in the first person, Bulwer offers a torturous working-out of her own identity. She is obsessed by names and places, frequently referring to herself by name, as well as other people, including her own relations, members of the Royal family (she claims to be ‘Princess Victoria’s daughter’), and various towns and places in the East of England.”