I’ve been trying to think about Apple’s deep embedding in a corrupt and tyrannical Chinese regime, and what that means for me, for my long-term commitment to Apple’s products. My first approach to the problem was a rough sketch of the issues involved in the use of any technology: 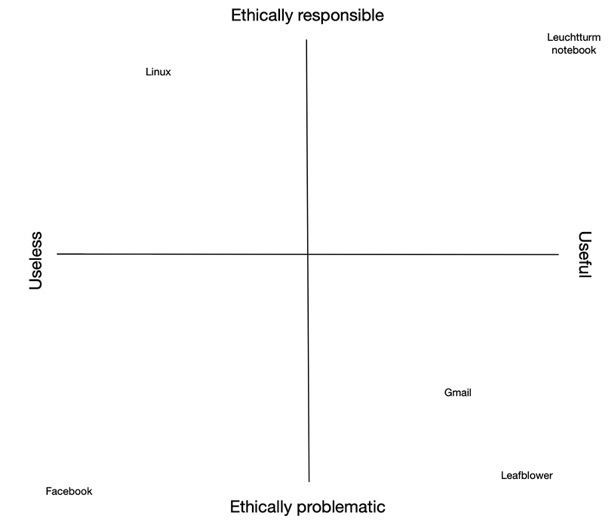 But as soon as I did this I realized that I was conflating certain categories that might better be kept distinct. For instance, “usefulness”: What makes something useful? A leafblower is useful in the sense that it moves a great many leaves around quickly; but a rake, while it moves those leaves much more slowly, gives its user more exercise without endangering his or her hearing, and those are valuable features. The ideal balance of the different kinds of usefulness will vary from person to person. It drives me nuts when I’m sitting outside and a lawn service shows up at a nearby house: here comes the deafening racket of the leafblowers, which will drive me inside for the next half-hour at least. But those guys are trying to make a living, which the use of rakes would make it considerably harder for them to do. I get that. I hate it, but I get it.

Or: Linux is useful in the sense that I can do almost any computer-related task on it, but such a task will often be, for me anyway, dramatically more difficult than on more polished systems. So I rank Linux as not especially useful to me.

The other axis, that of ethics, is even more difficult. Apple’s Chinese entanglements massive compromise the ethical status of the company, and in more than one way. (Which is worse, obedience to the demands of the Chinese government or the exploitation of Chinese labor?) But Apple also deserves some praise for its commitment to privacy and its truly wonderful work in making its computers accessible to a wide range of users. I don’t know how to make an ethics spreadsheet, as it were, that assembles all the relevant factors — including comparisons to the available alternatives — and gives them proper weighting.

In the end, I think most of us make this kind of decision by some kind of sixth sense, an un-unpackable feel for what’s the best, or the least bad, option in the given circumstances. I wonder if that sense is wholly irrational or whether, on some deep and inaccessible level, it’s actually finding a means to weigh what we don’t consciously know how to weigh.