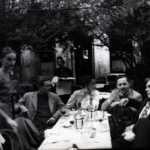 “I first glimpsed the image on a postcard I bought at a Memphis bookstore. In that rendition, the black woman in the background was left unnamed. Because I knew a bit about the history of Café Nicholson and the role that Edna Lewis, the African-American cookery writer and chef, played there, and because my eyesight isn’t so great, I wondered, perversely, whether the black woman ferrying what appears to be a pot of tea to the table was Lewis.” — John T. Edge