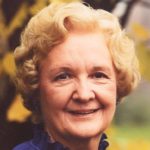 I have just learned, more than two months late, that Barbara Reynolds has died at the age of 100. May she now rest in peace — she rested little enough in her extraordinarily productive life.

I first met Barbara in 1984 at Wheaton College, where I was a new professor and she a frequent visitor to the Wade Center. She was deeply involved in understanding and promoting the Wade authors, especially, of course, Dorothy Sayers; but she also was willing to give talks for the English department whenever she came to campus. Some of these were quite serious and academic, usually on either Sayers or Dante, though once she gave an impenetrably dense and technical account of the teaching of Italian in British universities; but she also cultivated a distinctive and curious role as a comical after-dinner speaker — our “court jester,” as Beatrice Batson, her friend and the chair of the English department, would say. The chief thing I remember about these talks, of which I heard several over the years, was how funny Barbara herself thought they were. She could hardly get through them for giggling.

On that first occasion I sat next to another speaker at that conference, the distinguished poet and critic Donald Davie, who had met Barbara when they both taught at Cambridge twenty years earlier. “I can scarcely believe what I’m hearing,” he whispered to me. “She would never give a talk like this in England.” He seemed lost in thought for a moment, and then shook his head. “We’ve been on committees together from time to time. She’s a formidable woman.” Another pause. “In fact, she’s terrifying.”