Incuriosity and indifference — intellectual laziness and the absence of compassion — are vices that feed each other. If you don’t care about what happens to people, then you are unlikely to seek out more knowledge of their condition; and the less you know about their condition, the less you will feel called to compassion for that condition. Exhibit A for this vicious circle is this despicable essay by Heather Mac Donald. It’s not something I even want to talk about, but perhaps some commentary will be useful. Let’s start by zeroing in on one paragraph:

Much has been made of the “exponential” rate of infection in European and Asian countries — as if the spread of all transmittable diseases did not develop along geometric, as opposed to arithmetic, growth patterns. What actually matters is whether or not the growing “pandemic” overwhelms our ability to ensure the well-being of U.S.residents with efficiency and precision. But fear of the disease, and not the disease itself, has already spoiled that for us. Even if my odds of dying from coronavirus should suddenly jump ten-thousand-fold, from the current rate of .000012 percent across the U.S. population all the way up to .12 percent, I’d happily take those odds over the destruction being wrought on the U.S. and global economy from this unbridled panic.

(1) Notice the scare-quotes around “exponential” and “pandemic,” as though those are examples of Fake News. But they are precisely the accurate terms — which, in the former case, Mac Donald even acknowledges. So why the scare-quotes? Presumably they are an attempt to generate skepticism where no skepticism is warranted.

(2) Mac Donald clearly doesn’t understand the difference between the mortality rate of a disease and any currently uninfected individual’s likelihood of dying from the disease — because she hasn’t thought about it. She’s just tossing around numbers she thinks help her case. But for the record, if .12% — that is, a little more than one-tenth of one percent — of Americans died from COVID-19, that would be approximately 400,000 deaths. She’s “happy” with that.

(3) More to the point, MacDonald is obscuring, or is ignorant of, the relevant time-frames for considering these matters. She writes, “So far, the United States has seen forty-one deaths from the infection…. By comparison, there were 38,800 traffic fatalities in the United States in 2019.” But that is to compare data about one thing for an entire year with data about another thing for less than a month. Her essay was published on March 13; the first American to die from COVID-19 died just two weeks earlier, on February 28. Even if the rate of deaths from the virus remained steady — which Mac Donald admits will not happen — that would be an annual rate of over a thousand deaths.

(4) But this takes us back to the matter of geometric progression. In Italy, the first person to be diagnosed with COVID-19 was so diagnosed on January 30. I am not sure when the first person in Italy died of the disease, but as I write, 1,441 people in Italy have died from the virus — of 21,157 confirmed cases! — and the cases are increasing rather than slowing down. In short: this disease moves quickly. Take a look at this chart: 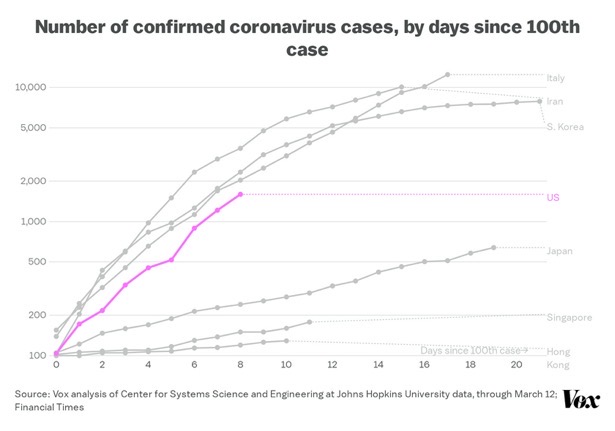 Full size version here. Two vital pieces of information in this chart: first, the rate at which cases in Italy are confirmed is increasing; second, the rate of infection for the United States looks a lot more like that of Italy than that of Japan or Singapore or Hong Kong. So over time the ten-thousand-fold increase that Mac Donald treats as an absurd extrapolation is certain to be dramatically exceeded. We can and should still do a lot to mitigate the effects, but a month from now the comparison to traffic deaths will not look good for Mac Donald’s case. She doesn’t anticipate this because, though she acknowledges geometric progression, she doesn’t grasp it, and as a result thinks only in terms of the present moment. Thus she writes, “The number of cases in most afflicted countries is paltry.” Yes; and the damage done to a coastal city by a hurricane is paltry — in the first ten minutes after landfall.

(5) Similarly, Mac Donald writes, “We did not shut down public events and institutions to try to slow the spread of the flu.” Indeed, and that’s because the flu has been around long enough that many people have developed immunity to it, which means that flu cases do not increase at a geometric rate. But the coronavirus is novel, which means that no one has yet acquired immunity. That’s why it moves so fast. Contra Mac Donald, not all transmissible diseases spread at a geometric rate — those rates vary quite a bit for many reasons, including the means by which they are transmitted — COVID-19 would be even worse if it were airborne — but also according to whether they’ve been through a particular population before. These are not difficult distinctions to grasp. For those who are willing to grasp them.

(6) We now reach the point in the essay at which intellectual laziness slides into moral callousness: “As of Monday, approximately 89 percent of Italy’s coronavirus deaths had been over the age of seventy, according to The Wall Street Journal. Sad to say, those victims were already nearing the end of their lifespans. They might have soon died from another illness.” Maybe! But — I’m not sure about the data in Italy — in the United States someone who is currently 70 years old can expect to live another fifteen years; and an 80-year-old can reasonably expect another nine years. These are not insignificant years to lose. Those can be times not just of personal satisfaction — older people are happier than younger ones — but also times when they can give counsel to their children and love to their grandchildren, or indeed give to others who are willing to acknowledge their personal value.

The only value Mac Donald seems to cherish is that of a stock market portfolio — for financial losses she feels great compassion, though she has none to spare for human beings. She should reflect on something John Ruskin taught us long ago: “There is no wealth but life.”