In his brief 1949 book The Enchaféd Flood, Auden writes of what happens when communities — gatherings of persons bound together (Auden does not quote Augustine here but is silently citing him) by a common love — deteriorate into societies — collections of human organisms defined by their social and economic function. One of his touchstone texts in writing about these matters is Moby Dick.

If a community so dissolves, the societies, which remain so long as human beings wish to remain alive, must, left to themselves, grow more and more mechanical. And such real individuals as are left must become Ishmael’s “isolatos, not acknowledging the common continent of men, but each isolato living in a separate continent of his own.”

(I’ve adjusted the spelling from “isolatoe” to avoid annoyance.) Auden goes on to make an unexpected and profoundly illuminating connection: “The grand explanatory image of this condition is of course Dürer’s Melancholia.” 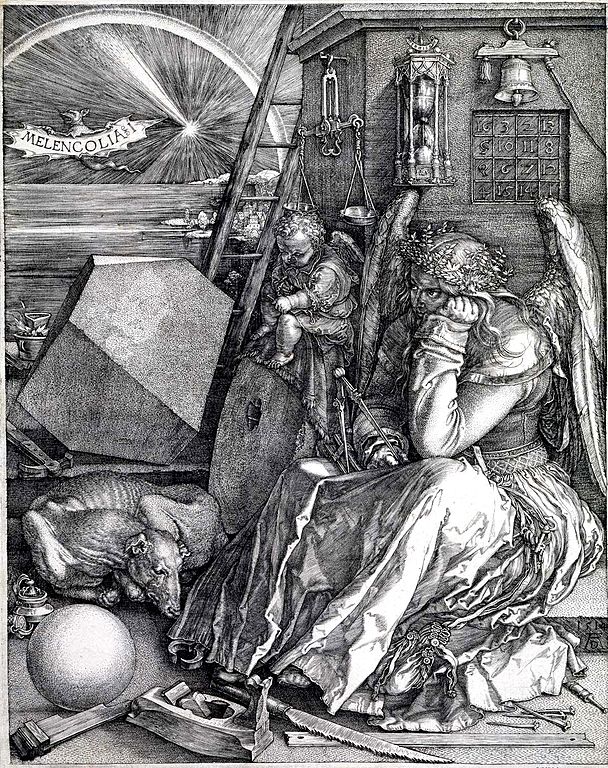 She sits unable to sleep and yet unable to work, surrounded by unfinished works and unused tools, the potential fragments of the city which she has the knowledge but not the will to build…

What is the cause of her suffering? That, surrounded by every possibility, she cannot find within herself or without the necessity to realise one rather than another. Urban society is, like the desert, a place without limits. The city walls of tradition, mythos and cultus have crumbled. There is no direction in which Ishmael is forbidden or forcibly prevented from moving. The only outside “necessities” are the random whims of fashion or the lifeless chains of a meaningless job, which, so long as he remains an individual, he can and will reject. At the same time, however, he fails to find a necessity within himself to take their place.

Earlier in his exposition Auden had drawn on Kierkegaard to describe those more common figures whose response to a lack of community is not to descend into melancholy but rather to accept their roles in a featureless “public” — Kierkegaard in The Present Age: “a public is a kind of gigantic something, an abstract and deserted void which is everything and nothing” — or to join some crowd, a crowd which might descend into a mob. These people are saved from melancholy by passively accepting the anonymity of the public or by attaching their anomie to the will of the crowd. As Auden wrote in an essay, “A mob is active; it smashes, kills and sacrifices itself. The public is passive or, at most, curious. It neither murders nor sacrifices itself; it looks on, or looks away, while the mob beats up a Negro or the police round up Jews for the gas ovens.”

On Good Friday, Auden wrote elsewhere, the crowd cried “Crucify him!” But that crucifixion was also enabled by those who shouted nothing but merely averted their eyes from the disagreeable spectacle.

The person deprived of a community who cannot, for whatever temperamental reasons, join the crowd or disappear into the public will inevitably become a melancholic “isolato.” Isolation, anonymous absorption of the self into some abstract social function, the madness of crowds — those are the three chief options for people who are deprived of genuine community.

The question then becomes: By what means might we achieve the restoration of community that will protect us from these dark fates?

It is important that Auden links both Ishmael’s condition and Dürer’s image of Melancholia with the failure of the city: For him what matters most about the unused tools scattered at the melancholiac’s feet, and perhaps also the geometric and mathematical images elsewhere in the print, are what they say about a built environment that has not been built, which indicates not only a loss of imagination and creativity but a failure to construct, which is, among other things, a failure to protect one’s community from natural and social enemies.

Hovering behind these expressed thoughts, I believe, is an ongoing meditation on the Aeneid. When Aeneas and his crew are shipwrecked on the Libyan coast and make their way to Carthage, Aeneas’s first words on seeing that city are “O fortunati, quorum iam moenia surgunt!” — Fortunate are those whose walls already rise — because he is impatient to raise the walls of the city he is pledged to found as a second Troy. But soon enough that impatience, coupled with love for Dido and grief for his lost city and wife, has him directing Carthaginian construction crews, something which Mercury, sent down by Jupiter, fiercely denounces: “tu nunc Karthaginis altae / fundamenta locas pulchramque uxorius urbem / exstruis?” So for love of this new wife of yours you’re building this pleasant city of Carthage? Instead of the one you’ve been commanded by the gods to build?

It looks like work that Aeneas is doing, but it’s not: Mercury says he’s wasting time, idling away the hours. The god thinks it’s love that keeps him in Carthage, but that’s not it, or not chiefly: it’s primarily a kind of structured procrastination born of melancholy.

Just three years before writing the lectures that became The Enchaféd Flood, Auden had held a temporary commission in the U. S. Army (rank: Major) and had participated in the United States Strategic Bombing Survey of Germany — note the initials in the background of this photo: 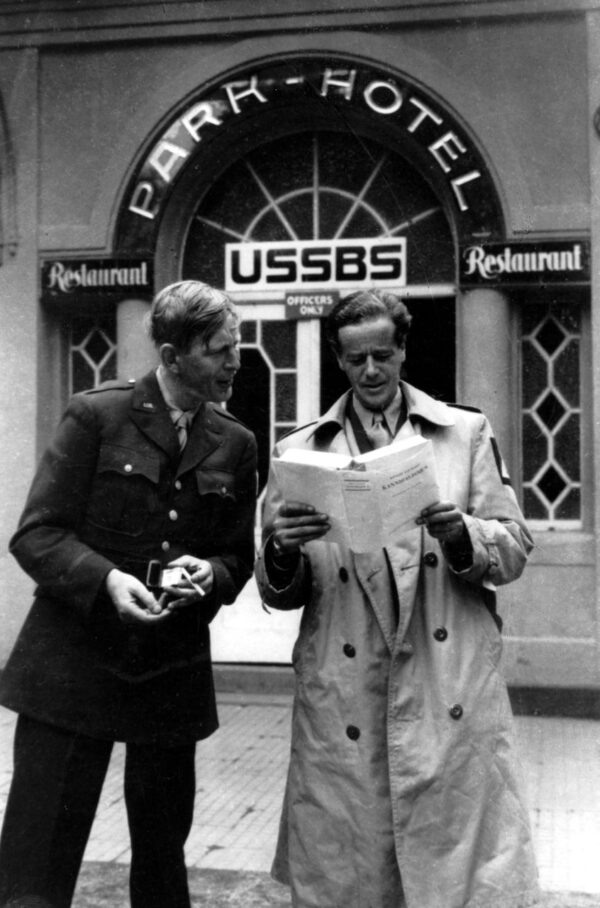 Think of the ruination Auden saw, and think of the great task of Aeneas, and you will grasp the import of this passage from the conclusion of those lectures:

We live in a new age … in which the heroic image is not the nomad wanderer through the desert or over the ocean, but the less exciting figure of the builder, who renews the ruined walls of the city. Our temptations are not theirs. We are less likely to be tempted by solitude into Promethean pride: we are far more likely to become cowards in the face of the tyrant who would compel us to lie in the service of the False City. It is not madness we need to flee but prostitution.

Aeneas’s melancholy — his anomie, his ennui — has led him to prostitute himself to a city other than his own: literally Carthage, but metaphorically and spiritually what Auden calls “the False City.” A city built on comforting but deadly lies; a city which might, at its very best, offer some kind of society but never genuine community. Aeneas has escaped from the dark fate of the “isolato”; but he has done so by being absorbed into a public that is not his own.

What are the virtues, what is the disposition, of the builder of the True City? How might someone be formed to possess the proper disposition? I think we know what the impediments are — That’s surely an iPad in the lap of the putto in Melancholia: he’s obviously pissed off by some jerk’s tweet — but what are the affordances? 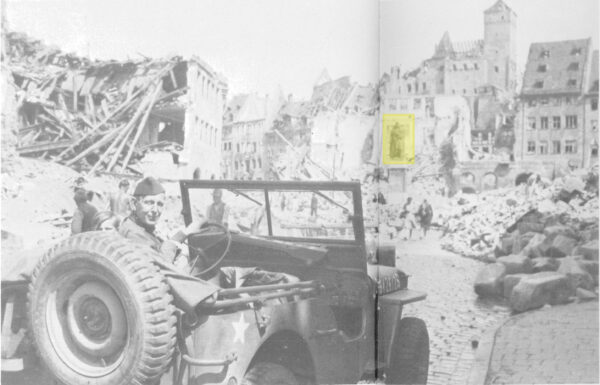 That’s Auden in his USSBS days, in late 1945, visiting the ruins of Nuremberg (photo scanned from this book). I’ve highlighted something curious at the center-right of the image. It’s a statue that by some miracle survived the bombing which, as you can see, completely devastated the rest of the city center. The statue depicts Albrecht Dürer.