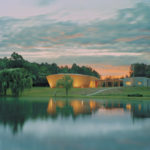 Lin employed an equally timeless form for the nearby Riggio-Lynch Chapel of 2004, a simple but beautifully crafted wooden structure whose subtly curving contours recall those of a boat, a reference that harks back to early Christian iconography of the church as a barque akin to that of Jesus and his apostles as they fished on the Sea of Galilee. Indeed, the architectural term “nave” — the main enclosure of a sanctuary—stems from the Latin navis (ship).

The Quiet Power of Maya Lin by Martin Filler | The New York Review of Books. Filler is so right about Maya Lin, but it’s curious that neither he nor his editors know that the primary reference of church-as-navis is to Noah’s ark. The Church is the ship of salvation, the instrument of God’s rescue of His people, as the Ark had been earlier.