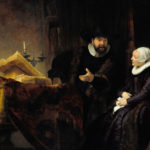 Minding the Modern begins with an extended meditation on Lorenzo Lotto’s Portrait of a Gentleman in his Study (1528-30). The young man’s “forlorn, abstracted, and blank gaze [suggests] disorientation and incipient melancholy.” Indeed, he seems “utterly alone in the world—the quintessentially modern, solitary individual confined in his study.” The massive tome in the image “intimates that books no longer hold answers, perhaps because the right questions elude him. The unwieldy folio appears more as dead mass than as a repository of learning.” Considering that the tome offered in turn by Pfau has the opposite effect, Minding the Modern might be considered an adequate response to Lotto’s painting. But Rembrandt’s The Mennonite Preacher Anslo and His Wife, from a century later (1641), offers an equally effective refutation of Lotto’s modern disaffection. Here the massive folio—in this case the Bible—emits light to the point of rendering the nearby candle superfluous. While the hand of Lotto’s gentleman was irresolute and listless, the hand of the preacher Anslo finds its vocation in gesturing to the truth-gushing book. Its message thereby migrates from the luminous pages, flapping like a dove in flight, to enliven the countenance of the preacher’s wife. “Nothing more convincingly refutes the once conventional and still not quite vanquished opinion that Protestant piety erected an insurmountable barrier between a corrupt nature and divine grace,” wrote Louis Dupré, “than its artistic and poetic achievement of the Baroque.” Displaying “an intensity of religious feeling that is anything but forensic,” Anslo’s wife—her name was Aeltje Schouten—is set to be overcome with some mysterious consolation. Enamored more by the truth than by her husband, she is poised to exit that melancholic, modern condition into which the young man in Lotto’s painting is about to descend.