my own private Kanban 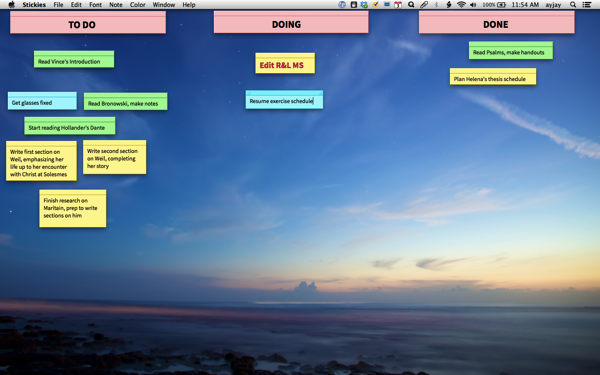 What you see above is a picture of an approach to task management I’ve been using lately — a simplified and individual version of the Kanban model used in software development and manufacturing/distribution. I dislike the rah-rah cheesiness of the Personal Kanban website, but I have to admit that it gave me the idea that this could work for me.

Kanban is supposed to be done with sticky notes on a whiteboard or wall, but that poses a problem for me: I work about half the time in my office, about half the time at home — so where do I put the board? An insoluble problem. So I decided to do it digitally, using the good ol’ Stickies app on the Mac.

Here’s the system as I have developed it so far:

Why do I like it? Because it uses a very simple structure to convey lots of information. At a single glance I can see what’s coming up, how much of it involves writing or teaching or personal stuff, what I’m (supposed to be) working on now, and what I’ve recently completed. Also, I can easily write in detail when I need to and minimize that note to it doesn’t dominate the screen.

What don’t I like? Really, only one thing: it’s not portable. I can’t export my data very conveniently, or view it on other devices. Not sure whether that will be a problem or not — that could end up being a feature rather than a bug. In any case, here it is, in case anyone is interested.

(Cross-posted from Text Patterns as a kind of test.)