Perhaps because I write different sorts of books, one of the most important writerly skills I have developed is the ability to adapt my working methods to the project at hand. Not every project calls for the same approach, the same model of organization, or the same tools.

For instance, when I was writing The Year of Our Lord 1943, with its five protagonists, the two most essential tools for me were (a) a color-coded timeline in Excel, so that I could see what each character was doing at any given time, and (b) a set of index cards. I had five protagonists so I got cards in five colors, and gradually accumulated information. Then, laying the cards out on a table or pinning them onto a cork board, I was able to understand the relations among those different pieces of information.

However, when I was writing How to Think I didn’t need that kind of system — I needed something very different. In that book, I had a sequential argument to make, one in which each chapter or section built upon the previous one. So I used OmniOutliner to lay out the whole argument in outline format, and then fill in the details.

When I was writing Breaking Bread with the Dead neither of those two methods would work for me. I was trying to create a kind of mosaic of ways in which we can encounter the past — a task that did not require and indeed did not admit a rigid argumentative or historical sequence. I had rather a set of portraits of people engaged in the complex activity that I call breaking bread with the dead, and each of those portraits needed to be coherent, vivid and, to some extent, self-contained. So in writing that book I just kept a set of text files open on my computer. I could go back and forth among them, but I didn’t need to do that very often, because each chapter had its own integrity. And on any given day, getting whatever chapter I was working on properly shaped was my primary task.

But now I’m starting a new book. I’m not yet ready to talk about what it is, though I’ll get to that point before too much longer. For now, I’ll just say this: After fumbling around for a while to figure out how I could organize my thoughts in for this project, I realized that once again, the good old multicolored index cards were my best friends. And it’s actually been very pleasurable to go back and, for the first time in several years, build up a collection of cards and figure out how to relate them to one another. I use my own version of the Zettelkasten system, and maybe one day I’ll write a post about what that looks like.

But for now I just want to say that I think writers make a mistake when they try to use the same method, the same organizational system, for every book. The character of the project — its structure, its form, the demands it makes upon you as a writer — should determine the way you write the book. If you’re writing the same kind of book every time — like Robert Caro, for instance — then by all means use the same system. But if not, exercise your imagination! 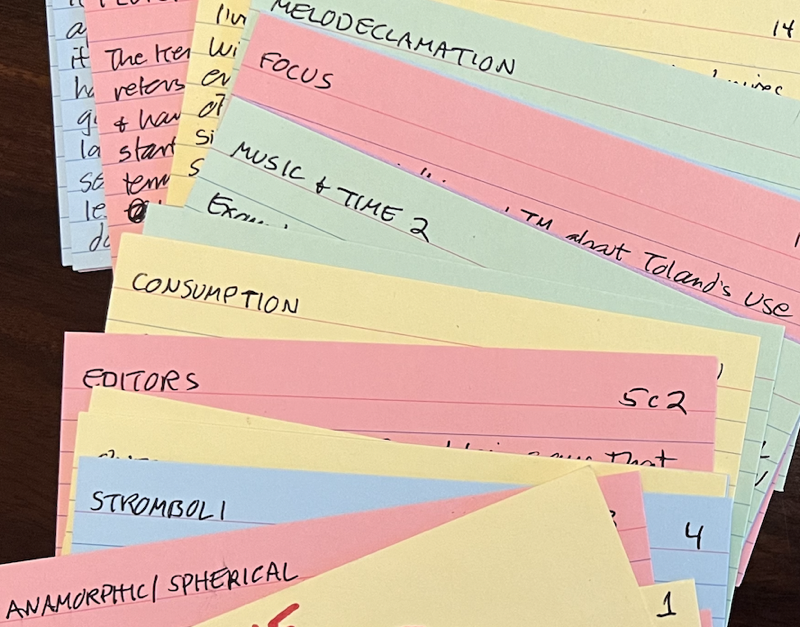