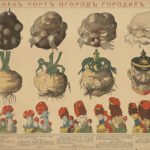 How the Devil grew his garden. A poster showing the Kaiser and his sons growing out of various vegetables. Harry Ransom Center. 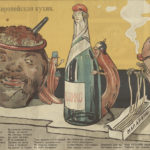 European Cuisine is the first poster in the series that details the start of the war between the German and Austrian sausages and the Russian porridge and the concerns of the other foods (countries). 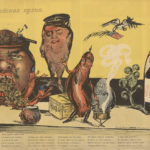 European Cuisine (Second Course). The second poster in the series illustrates the definitive victory of the Russian porridge over the Austrian sausages with the support of the English beefsteak and an 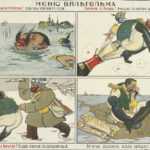 Wilhelm’s Menu. A four-panel cartoon depicting the Kaiser being defeated at breakfast, lunch, and dinner before being forced to sit in defeat.