I am grieved to hear of the death of Donald Sniegowski, known to one and all as Doc. Doc is father to my dear friends Paul Sniegowski and Gail Kienitz — “father-in-law” seems a little too distant to describe his relationship with Gail — and grandfather to my goddaughter Emma. My wife Teri and I first met Doc many years ago at his and Barbara’s home in South Bend, where we were immediately welcomed with great warmth and festivity. There tended to be a lot of festivity when you were around Doc.

Some years later, after our son Wesley came along, we connected with Doc and Barbara in England, and they swept Teri and Wes away on a day trip to the Cotswolds. Here’s a photo of Doc explaining to Wes how to look for fish in the stream: 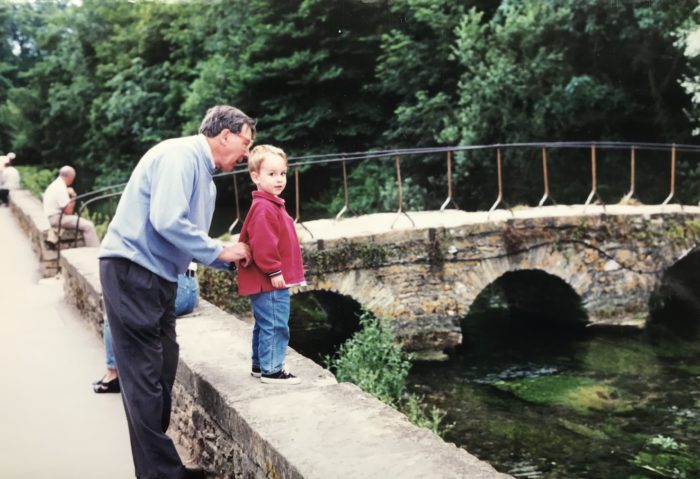 (Wesley adored Doc. When he was even younger than he is in this picture he would sit in a high chair at the Sniegowskis’ dinner table and imitate Doc’s voice, which made Doc laugh, which made Wesley laugh, which made Doc laugh even more, in  a marvelous escalation of hilarity.) You can tell just from that pose that Doc would become a wonderful grandfather — which happened, and soon, for Emma came along not long after this, and then eight more grandchildren.

Doc understood the vocation of teacher to be a one of service — it was in helping his students that he fulfilled his calling, as many of them (including Gail) will readily testify. I have always wanted to be more like him than I am, and not just in this. Frederick Buechner says that a saint is a life-giver, and by that criterion anyway Doc was a saint. You always felt a little more alive, a little more aware, and little more delighted with the world when you were around him — so much so that I have struggled to use the past tense in this post.

I last saw Doc when I gave a talk at Notre Dame, maybe six years ago, and over dinner after the talk there was much laughter between us. I deeply regret how rarely our paths crossed in these recent years. But I have thought of him often, and will continue to remember him, and to be grateful for his example, and for his great, great kindness.