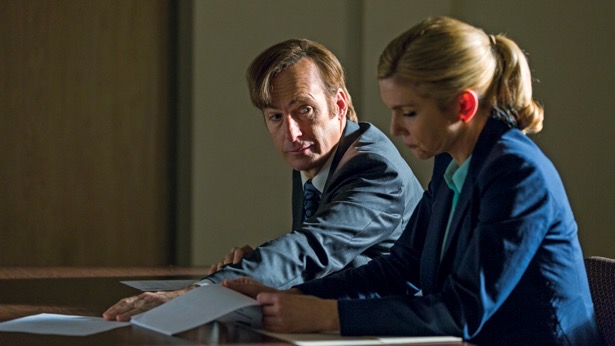 Watching the first episode of Season 5 of Better Call Saul, something occurred to me: This story isn’t about Jimmy any more. It’s about Kim. (And, in an only slightly less serious way, about Mike and Nacho.) The metamorphosis has occurred: Jimmy McGill is Saul Goodman. There’s no way back for him. The guy who was always, and would always be, “Chuck McGill’s loser brother” is dead. Saul may have some fascinating adventures from here on out, but his character arc is complete. The key question that remains is: How can Kim extricate herself from her entanglement with him?

One of the key moments in the entire series came in the final episode of Season 4, when Jimmy, arguing before a committee of attorneys for the restoration of his license to practice law, makes a moving speech about his desire to honor his late brother. The members of the committee are touched; Kim’s eyes well up. And then, afterwards, when Jimmy learns that his license has been restored, Kim begins to tell Jimmy how much his speech touched her, only to have him leap in to say, “Did you see those suckers? That one asshole was crying. He had actual tears!” Rhea Seehorn should win an Emmy simply for the look on her face when Kim hears those words.

From this point on we know that Jimmy is, functionally if not intrinsically, a sociopath. The problem for Kim is that she is not wholly unlike him. We know from earlier seasons that their relationship was largely built on their mutual fondness for scams, their pleasure taken in turning people into marks. And here at the beginning of Season 5, there’s one more chance for a scam. One of Kim’s clients — in her public defender work — needs to take the plea deal offered by the D.A. But he won’t. He wants to go to trial because thinks he can charm the jury and get off. Kim can’t talk him out of it.

And then Jimmy/Saul shows up ready to improvise a scam that will scare the client into taking the plea deal … and Kim, after forcefully telling Jimmy/Saul to bug off, ends up playing the very game he had suggested. And of course it works. The client is scared into good sense. All in a good cause, right? Everyone’s better off, right?

Maybe. But at what cost to human dignity — of the client and of Kim? She sees how easily she could go down Jimmy’s path. She feels it. But will she? And if not — how does she get out?