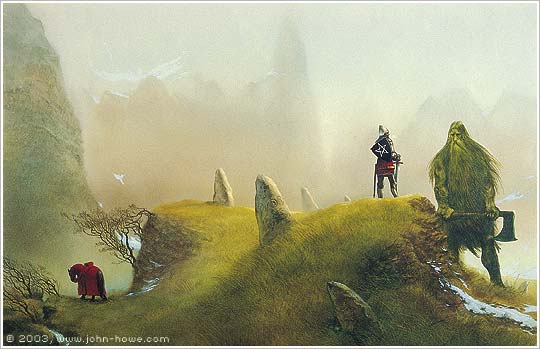 If you look closely at the picture above (by John Howe, the famous Tolkien illustrator) of Gawain’s confrontation with the Green Knight, you’ll see the pentangle on his shield. That is described much earlier in the poem:

First he was deemed flawless in his five senses;
and secondly his five fingers were never at fault;
and thirdly his faith was founded in the five wounds
Christ received on the cross, as the creed recalls.
And fourthly, if that soldier struggled in skirmish
one thought pulled him through above all other things:
the fortitude he found in the five joys
which Mary had conceived in her son, our Savior.
For precisely that reason the princely rider
had the shape of her image inside his shield,
so by catching her eye his courage would not crack.
The fifth set of five which I heard the knight followed
included friendship and fraternity with fellow men,
purity and politeness that impressed at all times,
and pity, which surpassed all pointedness. Five things
which meant more to Gawain than to most other men.
So these five sets of five were fixed in this knight,
each linked to the last through the endless line,
a five-pointed form which never failed,
never stronger to one side or slack at the other,
but unbroken in its being from beginning to end.

Sir Five-by-Five his friends called him, though probably not. In any case, here early in the story the poet is describing the images that represent what Gawain trusts in — above all, “the fortitude he found in the five joys / which Mary had conceived in her son, our Savior.”

And yet when faced with the prospect of meeting the Green Knight again, Gawain gives no thought to Mary or her Son. He trusts rather in the garter a certain lascivious lady gave him. (Isn’t he a little too old to believe in magical garters?) So how’s that going to turn out for him?

In the end: not so badly, because the Green Knight (Bertilak in disguise, we learn) really was playing a Christmas game after all. He never intended to chop Gawain’s head off; he just wanted to teach him, and the whole court of Arthur, a lesson. And the lesson is that they are guilty of pride — which is to say, it is a specifically Christian lesson that the the Knight wishes to teach.

Arthur’s court is a very self-satisfied place. They believe that they are the very flower of chivalry — and chivalry, as I mentioned in an earlier post, is comprised of courtesy and courage. But Gawain, by declining to keep his promise to his host, by hiding from him what he had received, failed in courtesy; and he did it because he was terrified of losing his life (a lack of courage he demonstrated once again at the moment of confrontation with the Knight). Yet Gawain is morally the best of all Arthur’s knights.

Now, you might respond that shitting your silken hose when faced with a an enormous green man threatening your neck with a “gigantic cleaver” is a pretty understandable human response. But Gawain, like other members of the Arthurian court, doesn’t think of himself as an ordinary human. Thus the Green Knight: “‘Call yourself good Sir Gawain?’ he goaded, / ‘who faced down every foe in the field of battle / but now flinches with fear at the foretaste of harm.’” In the end Gawain, who is supposedly the most chivalrous of Arthur’s knights, turns out to be a poor weak sinner like the rest of us. This is to him an intolerable revelation:

“Dread of the death blow and cowardly doubts
meant I gave in to greed, and in doing so forgot
the fidelity and kindness which every knight knows.
As I feared, I am found to be flawed and false,
through treachery and untruth I have totally failed.”

(Again, as I mentioned in an earlier post, this is a culture that takes the sin of “treachery” very seriously indeed.) Bertilak the Green doesn’t deny Gawain’s account — he implicitly accepts it — but rather plays the role of a priest pronouncing absolution:

“By confessing your failings you are free from fault
and have openly paid penance at the point of my axe.
I declare you purged, as polished and as pure
as the day you were born, without blemish or blame.”

As much as to say: “Of course you failed, just like everyone else. What matters is that you confessed your sins and may thus be forgiven.” But if even the noble Sir Gawain collapses under pressure, then what becomes of Camelotian Exceptionalism? And this is the lesson that Morgan le Fay — not here the enemy of Camelot but its moral instructor, playing the same role that Nathan plays to King David as the revealer of a true but previous hidden moral state — wants the Arthurian court to learn. Thus Bertilak: “She guided me in this guise to your great hall / to put pride on trial, and to test with this trick / what distinction and trust the Round Table deserves.” The answer to that test: it deserves not nearly as much distinction as its members think.