slowing down the Warriors

Of all the things that separate pickup basketball from basketball played at a very high level — as it is played in the NBA and in the best college programs — probably the most dramatic is help defense. When you’re playing pickup ball you guard your guy, and that’s about it. If you happen to be able to sneak up behind someone else to steal the ball, or come over to block a shot, that’s awesome — but it’s not expected. Your job is to guard your guy. But at the higher levels of the game defenders are always helping one another, and in general it’s fair to say that the better a defense is overall, the better it will be at helping.

However, when you’re playing the Golden State Warriors it may be that help defense … well, that it just doesn’t work.

By definition, if you help one of your teammates defend his guy, you leave your guy open. And if another teammate jumps over to pick up your guy, then his guy is open. Help defense is predicted on the belief that it’s possible for such rotation to be quicker and more intelligent than the offensive response to it — that the offensive players will be slow to move the ball, or will make an inaccurate pass, or will run out of time on the shot clock. And often that’s just how it works out.

Just not when you’re playing the Warriors.

So what if it turns out that the best way to play the Warriors is to play as you do in a pickup game? — just guard your guy. Don’t help out, don’t switch unless you absolutely have to, go over the top of every single screen.

But then they’ll drive past me!

Yes, that’s likely, though you will get some help if they get close to the basket from your big men, just as happens in a pickup game.

But what they won’t get is open 3-point shots — the kinds of shots they make more frequently than any team in the history of basketball, the kinds of shots that can very quickly turn a tie game into a double-digit lead for GSW. The Warriors as a team shoot 42% from 3-point range, which is the equivalent of shooting 63% from 2-point range. If you can cut down dramatically on their 3-point attempts — and contest the ones they do take, which you can do more easily because you’re still guarding your guy — and simply keep them under 60% from 2-point range … you’ll have a chance. It just might work. Better than conventional defensive strategies are working, anyway.

Of course, this would take a coaching staff bold enough to take the risk of abandoning a universally-practiced system of defense, and a team smart enough to break its old habits, and a group of big men disciplined enough to avoid fouling people shooting layups. In other words, it would take the Spurs, who, after all, have a history of abandoning universal practices.

I love watching the Warriors, but it would make me very happy if Pop were cooking up something like this in his South Texas basketball laboratory. 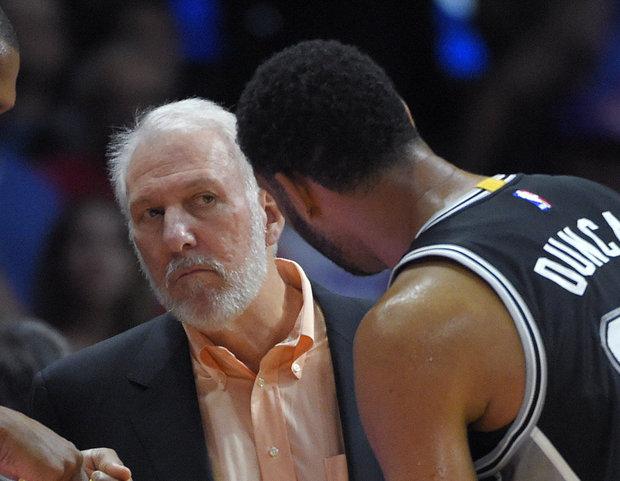