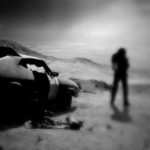 Someone said to me the other day that MAD MAX is “his Star Wars.” His modern myth. A myth of the time of steel and petrol, that’s about collapsing back into dark history. Viewed as a continuum, the film cycle almost plays as a warning sent ahead to us from 1980. A time capsule that’s still telling itself stories from inside its box. FURY ROAD doesn’t feel like a modern film. It’s a throwback to classical filmmaking. A scream from the nightmares of the last century.