I think peace often arises from clarity. So let’s be clear about a few things:

Therefore, fellow Arsenal supporters: Be pleased when your team makes the top half of the table. Be ecstatic when they make the Europa League. And don’t expect, or even hope, for anything more.

Watching all these big sports clubs scrambling to appease the Chinese regime, and punish the coaches and players who don’t bow and scrape — Arsenal being the most recent of these — I find myself singing, “If Adolf Hitler flew in today / They’d send a limousine anyway.”

A Guardian reader speaks for me:

It wasn’t fun while it lasted.

Emery always struck me as a really decent man who was wholly out of his depth at Arsenal. I can’t read his mind, but I had the feeling that he was paralyzed by high expectations, which exacerbated both his natural caution and his habit of ceaseless tactical tinkering. The atmosphere at the Emirates grew so noxious that the players clearly didn’t want to win for Emery, because a win here and there — they knew that consistent winning was impossible — would merely have prolonged the agony.

It’s interesting that Freddie Ljungberg’s tweet in response to his hiring emphasizes putting smiles back on faces at the Emirates. There haven’t been many smiles there lately.

The betting shops are strongly favoring Max Allegri as the next permanent gaffer. Not sure what I think about that. You can’t learn much from his success at Juventus, because the resources he commanded there would’ve made almost anyone successful. He was very good at Milan at first, but after the catastrophic and inexplicable error of ditching Pirlo results declined, and his sacking after four years was probably deserved. I also don’t have a clear sense of what style he prefers when he doesn’t have more money at his disposal than any of his rivals. On balance, I think I would prefer Arteta, even with his lack of head-coaching experience, because he’s very, very smart and under Pep will have learned a lot about how to implement a style of football that suits the game as it is today. (This Amy Lawrence piece suggests that Arteta could be the frontrunner after all.)

The good news is that the season isn’t lost. Europa League chances are still alive, and, more important, a top-four finish in the PL is certainly possible, given the weaknesses and inconsistencies of most of the chief rivals. We may look back and see that the departure of Emery come just in time.

About a month ago I deleted all the big Arsenal sites from my RSS feed. Today I’m bringing them back.

excerpt from my Sent folder: poor

And if it doesn’t work out, bring Rafa Benitez back from China. He’d be excellent for this poor beleaguered confused rudderless spiritless team.

this is the future Arsenal supporters want 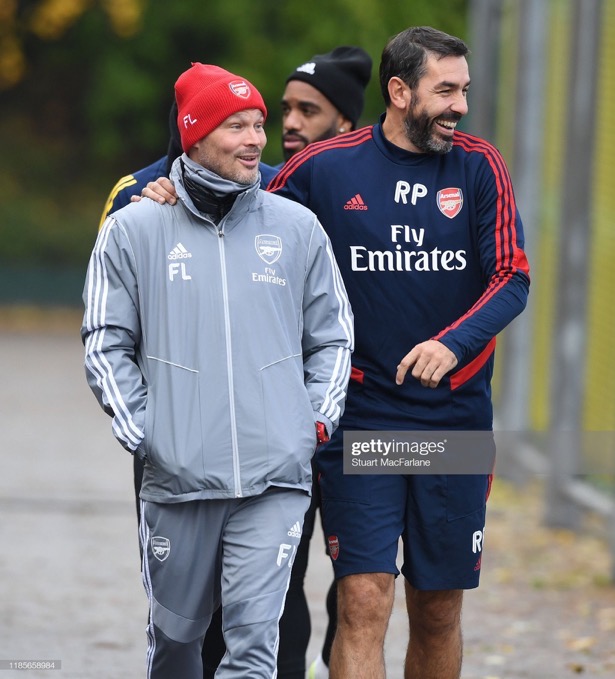 Xhaka is not the problem

Granit Xhaka is nothing like the player Arsenal supporters thought he was, or could become, when the club signed him in 2016. The idea then was that he would provide steel in deep midfield, a combination of defensive strength and playmaking from a deep position — something Arsenal haven’t had since the departure of the great Patrick Vieira. It turns out that Xhaka has one skill and one skill only: he can make a good long pass, usually diagonally, when he has plenty of time on the ball. He can’t dribble, he can’t make runs into the box, he can’t shoot except for the occasional long-range blast. On defense he is both slow and positionally unaware, which means that he is always a booking waiting to happen.

But Xhaka is not the problem. The problem is a manager who makes Xhaka perhaps one of the most constant figures in the teams he selects (along with Leno and Auba). Week after week Emery sets Xhaka up for failure and week after week Xhaka experiences precisely what Emery has set him up for.

Torreira can’t make the long passes that Xhaka makes, but in every other respect bar none he is a far superior footballer, and it’s simply stupid to sit him in favor of Xhaka. Maitland-Niles, for all his struggles at fullback, would be better than Xhaka as a holding midfielder. Dani Ceballos could actually make plays from the deep-lying position, though I would prefer to see him farther up the pitch. Emery could pick names out of a hat and do better than he has been doing.

The one trait that we have consistently seen from Emery since he took over Arsenal is this: he makes personnel decisions without reference to what works on the pitch. We started seeing that last year when Arsenal were far more dangerous with Auba and Lacazette on the pitch together, but Emery wants to play a single striker, so they rarely paired up. This year we have seen the team utterly lacking in midfield creativity and playmaking, yet Özil has been completely sidelined and Ceballos plays only occasionally. (I know the problems with Özil, but the team is offensively moribund. Scrappy set-piece goes from your center backs are not a recipe for Premier League success.) Emery is holding desperately to some model of football that he cannot implement nor even articulate. He is stubborn in his commitment to an indescribable will-o-the-wisp.

Every day I check my RSS feed hoping to learn that he’s been sacked. Every day I am disappointed. There’s no reason to give up on this season — Arsenal are a very talented squad, by far the most talented in recent years — but many of the more gifted players are riding the pine. If Emery doesn’t go soon, supporters will need to write off another season. And that simply shouldn’t be necessary.

we have to talk about Mesut

Mesut Özil creates an impossible situation for his manager. He can go for long periods — and by “long periods” I mean several weeks — in a kind of fog, trotting aimlessly up and down the pitch, rarely seeking the ball when the Gunners are in possession and rarely presuming to interfere when the other team is on the attack. But then, even in the midst of one of those funks, he can do what he did today: make the inch-perfect cross — or through-ball, or reverse pass, or surprising incisive run — that creates the goal that wins the match.

You just never know what you’re going to get from Özil. Wenger has to be greatly tempted to sit his ass on the bench for a couple of games … but, especially with Santi Cazorla out, he really doesn’t have anyone else who has that level of creativity. Heck, there aren’t ten players in the world with Özil’s level of creativity. (Creativity in this case being the imagination to see a possibility on the pitch and the technique to make that possibility happen.)

And then Wenger has to be thinking, Maybe, just maybe, I can find the key that will turn his motor on once and for all. Indeed, earlier this year it looked like he had found that key, as Özil went on a kind of scoring spree, producing a series of skillful and beautiful goals. But now he has lapsed back into his fog — and the fear now has to be that he will never come out of it.

All in all, and I have to say that I’ve gone back and forth on this point, I don’t think he’s worth the money he will command when his contract is up; whereas I do think Alexis is worth the money he will command. So I say: sign Alexis, let Özil go, use that money to buy two or three players, at least one of whom has a chance of replacing the aging Santi.