I started telling people what a terrific writer Brian Phillips is back in 2008, when he wasn’t yet even a gleam in Bill Simmons’s eye, and since then I’ve written for his old site The Run of Play, we’ve eaten lunch together in Harvard Square, and once we joined forces to confront an enraged lunatic photographer on Flickr. When you’ve been through the wars like that, it forms a bond, you know? So I’m as proud as a slightly obnoxious big brother to learn that he’s a fantastic podcaster too.

I have enjoyed this whole series, but now that we’re at Dennis Bergkamp … well. My feelings about Dennis Bergkamp are strong. Watch the YouTube clips Brian has lined up there, and you’ll see why. 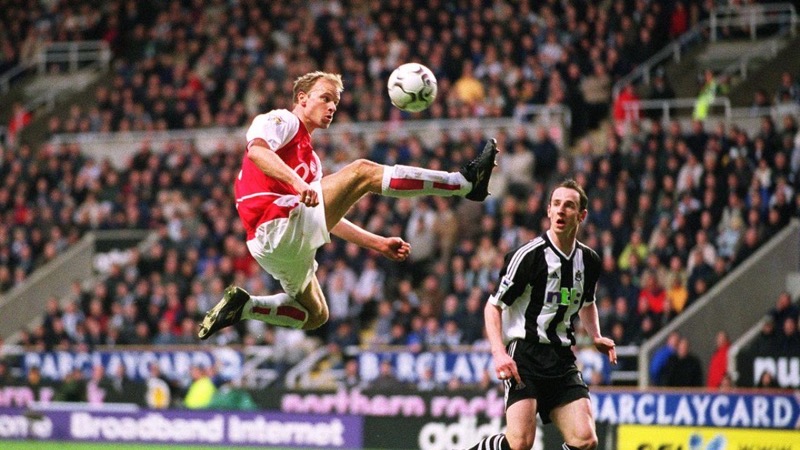 I’m going to make one point about that goal against Argentina — the ostensible subject of Brian’s episode — and then a more general point. Brian describes the goal well: the long, long pass from Frank de Boer; Bergkamp’s leaping first touch that kills the ball; the subtle pullback from the right side of his body to the left that sends Roberto Ayala flying. But then there’s the shot itself. Bergkamp can’t take the time to shape his body to take a proper shot, with either foot; all he has time for is a toepoke, a quick insouciant flick of the ball that looks a little like a dancer doing the can-can. And yet the ball just arrows into the roof of the net. The first touch and the pullback came from masterful technical skill; that shot from sheer imagination.

Thus my more general point: As Brian hints, Bergkamp’s distinctive style of play was simply made for YouTube, because all of Bergkamp’s greatest plays leave you saying, Wait … what? What did I just see? Let me rewind that.

Consider the two examples Brian gives near the end of that post (which transcribes the episode). On that assist to Freddie Ljungberg vs. Juventus the commentator doesn’t even mention the pass, because I don’t think he has any idea what has just happened. And to be fair, it’s almost impossible to see on a first viewing. You have to run it back and look again, because it’s that imagination again, that Bergkampian sublime. If you’re commenting on the match you just end up saying “Terrific goal from Ljungberg!” or the like — because the actual finish is something that happened in the world of space-time as we know it. The pass, by contrast, happens somewhere else.

The famous Newcastle goal is even weirder. I’ve seen it a hundred times, and every time I see it I say, “Wait … what?” What precisely did he just do? Also, how did he ever think of that? “Ah, when the ball gets to me I’ll just flick it to my right and behind me, while simultaneously pivoting to my left, so that the ball and I will meet in an enveloping pincer movement that will leave the defender and keeper helpless!” As Brian says: Ladies and gentlemen, Dennis Bergkamp!

But I want to look at one more, this one:

Again, the perfect first touch, followed by a little private game of keepy-uppy, and then the clinical finish. But what I love most about this is the reaction of the defender, who had been right there, who had been in perfect position, who had done his job … and yet look at what happened. As the ball goes into the net his hands fly up to his head: “Wait … what??”