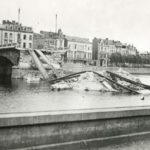 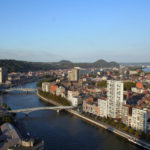 The city of Liège, Belgium in 1914, under siege, and in 2009. When, in August 1914, the German armies decided to cut through Belgium on their way to France, thereby mocking the treaty Germany had signed to protect the integrity of Belgium, they expected no resistance. They got resistance.

Their immediate response was to burn a nearby village to the ground, shoot a good many random civilians, and round up Catholic priests and execute them on the totally spurious, invented-on-the-spot grounds that they were spies working against Germany. All that happened on the first day of the German invasion. When those actions did not lead to a Belgian surrender, the Germans sent zeppelins over the city to terror-bomb it into submission.

The notion that the Great War was fought in a relatively civilized way, and that it was only World War II that introduced terror against civilians as an essential element of military strategy, is belied by these first events of the earlier conflict. The German army didn’t continue in this vein simply because it couldn’t: it had limited access to major population centers for the rest of the war. But from the moment the war began the Germans were prepared to destroy anyone who stood in their war, without regard to any other consideration, no matter how time-honored or essential to humanity.