In a key passage of A Secular Age, Charles Taylor writes:

Although we respond to it very differently, everyone understands the complaint that our disenchanted world lacks meaning, that in this world, particularly youth suffer from a lack of strong purposes in their lives, and so on. This is, after all a remarkable fact. You couldn’t even have explained this problem to people in Luther’s age. What worried them was, if anything, an excess of “meaning”, the sense of one over-bearing issue — am I saved or damned? — which wouldn’t leave them alone. One can hear all sorts of complaints about “the present age” throughout history: that it is fickle, full of vice and disorder, lacking in greatness or high deeds, full of blasphemy and viciousness. But what you won’t hear at other times and places is one of the commonplaces of our day (right or wrong, that is beside my point), that our age suffers from a threatened loss of meaning. This malaise is specific to a buffered identity, whose very invulnerability opens it to the danger that not just evil spirits, cosmic forces or gods won’t “get to” it, but that nothing significant will stand out for it.

There was indeed, a predecessor condition with some analogies to this one, and that was “melancholy” or “acedia”. But this was, of course, enframed very differently. It was a specific condition, one might say, a spiritual pathology of the agent himself; it said nothing at all about the nature of things. It cast no doubt on the ontic grounding of meaning. But this ontic doubt about meaning itself is integral to the modern malaise….

Meanwhile, this malaise, and other similar ones, speak to the condition of the buffered identity. This condition is defined by a kind of cross-pressure: a deep embedding in this identity, and its relative invulnerability to anything beyond the human world, while at the same time a sense that something may be occluded in the very closure which guarantees this safety. This is one source … of the nova effect; it pushes us to explore and try out new solutions, new formulae. 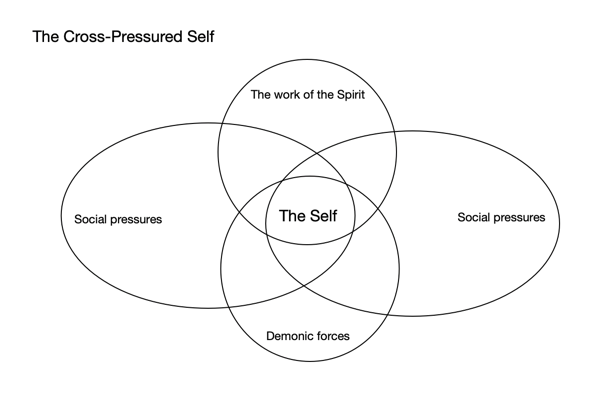 But of course a “very basic” account is not what we need. And this is where literature and the other arts come in. Great works of art offer non-schematic, finely-grained accounts of how people navigate these cross-pressures. (A phrase that Martha Nussbaum borrows from Henry James, “finely aware and richly responsible,” seems apropos here.) Tolstoy, Dostoevsky, Auden, Pynchon, Percy, Bach, Caravaggio, Vermeer, and many others — these artists collectively shape my understanding of (a) the complexity of the cross-pressuring forces and (b) the multifarious ways we humans respond to those forces.

Such complexity and multifariousness make me wonder whether we can ever come up with a valid general account of the Cross-Pressured Self. And yet we need one … I think.

I’ve written before about the value of moderation in consistency, of the need when cross-pressured by countering winds to tack back and forth. Similarly, there’s the need, when trying to understand one’s world, to alternate between specificity and generality. I do a lot better with specificity, because I have seen the ways that the embrace of a Big Theory tends to shut down people’s minds. But lately I have been feeling the absence, in my thinking, of a more general account of who we are, how we got here, and how we might navigate the prevailing winds of the future.

Or is that feeling merely a temptation? — Is the “general account” rather a snare and a delusion? Last month I had a stimulating conversation with Tal Brewer, a philosopher at UVA, in which Tal made the point that practical rationality is not a matter of calculating the means to a given end but rather acting in such a way as to instantiate that end right now, as best you can. (I think he explores the distinction, which is largely a distinction between a Kantian and an Aristotelian model, in this essay, but I haven’t yet acquired and read it.) I like that idea in part because it resonates with my understanding of Daoism. Daoism is big on doing the immediate right thing — and thus, in turn, rhymes with biblical ethics, focused as it is on obeying God (i.e., following Jesus) this day, and being held by God this day. Which is the special focus of Franciscan spirituality, and as I have said before, St. Francis is a kind of Jesus-loving Daoist sage.

So maybe a “general account” is not what is needed so much as equipment for acting wisely and lovingly — in a Christlike way — this day. A Franciscan-Daoist ethic for a surveillance-capitalist hate-media world. What that might look like is something I plan to think about a lot in the coming year. Please stay tuned.

There will be more soon on the specific notion of “equipment.”