After the coronation of Queen Elizabeth II in 1953, C. S. Lewis wrote to an American friend,

You know, over here people did not get that fairy-tale feeling about the coronation. What impressed most who saw it was the fact that the Queen herself appeared to be quite overwhelmed by the sacramental side of it. Hence, in the spectators, a feeling of (one hardly knows how to describe it) – awe – pity – pathos – mystery. The pressing of that huge, heavy crown on that small, young head becomes a sort of symbol of the situation of humanity itself: humanity called by God to be His vice-regent and high priest on earth, yet feeling so inadequate. As if He said ‘In my inexorable love I shall lay upon the dust that you are glories and dangers and responsibilities beyond your understanding.’ Do you see what I mean? One has missed the whole point unless one feels that we have all been crowned and that coronation is somehow, if splendid, a tragic splendour.

You either feel this kind of thing or you don’t. It makes sense that Lewis would feel it, not so much because he was British — as a native Irishman he had somewhat complicated feelings about that — but because he had been steeped all his life in stories, in histories true and feigned, about a monarchical world. He didn’t just know about the King’s Two Bodies, he felt that doctrine in his bones. Thus his overwhelming “awe – pity – pathos – mystery” at the doubleness of the moment: an ordinary young woman, wife and mother, bearing in her own body and on her own head the astonishing idea that we are all meant to be kings and queens, and to rule on behalf of the One True King. As the hymn says,

Finish, then, thy new creation;
true and spotless let us be.
Let us see thy great salvation
perfectly restored in thee.
Changed from glory into glory,
till in heav’n we take our place,
till we cast our crowns before thee,
lost in wonder, love, and praise.

That hymn is the secret text of Lewis’s most famous address, “The Weight of Glory,” which describes the burden we feel when we face this high calling:

I read in a periodical the other day that the fundamental thing is how we think of God. By God Himself, it is not! How God thinks of us is not only more important, but infinitely more important. Indeed, how we think of Him is of no importance except insofar as it is related to how He thinks of us. It is written that we shall “stand before” Him, shall appear, shall be inspected. The promise of glory is the promise, almost incredible and only possible by the work of Christ, that some of us, that any of us who really chooses, shall actually survive that examination, shall find approval, shall please God. To please God … to be a real ingredient in the divine happiness … to be loved by God, not merely pitied, but delighted in as an artist delights in his work or a son — it seems impossible, a weight or burden of glory which our thoughts can hardly sustain. But so it is.

The coronation of Elizabeth as Queen, seen in a certain way, the way Lewis saw it, is the coronation of one nation’s Queen but also a dramatic performing of this weight of glory — the glory and the weight in equal measure, poised in juxtaposition.

One of the most-quoted sentences in the days since Elizabeth’s death has been the pledge she made on her twenty-first birthday in 1947: “I declare before you all that my whole life, whether it be long or short, shall be devoted to your service and the service of our great imperial family to which we all belong.” And I don’t think anyone — friend or enemy of the British Crown — doubts that she meant it when she said it and that she tried to live up to it for the rest of her very long life. And thus many, in these recent days, have felt a rather different “awe – pity – pathos – mystery” than Lewis felt at the coronation: in this case this peculiar complex of emotions arises from seeing one who has borne a burden, a weight, for a very long time finally laying that burden down.

As I say, either you feel this way or you don’t. It’s perhaps a little harder for us Americans to feel it, because we are not accustomed to the idea that the head of state can be someone altogether different (and fulfilling an altogether different function) than the head of government. On rare occasions something can happen to awaken the impulse even in us. JFK’s assassination was that for many, and gave birth to a kind of cult of Lost Hope — the Camelot myth. Perhaps a better example was provided to me by my mother-in-law, who is a year older than Elizabeth and is still with us: She said that when FDR passed “it was like everyone’s father had died.” Likewise, many Christians, and not just Roman Catholics, felt that the stooped, frail figure of Pope John Paul II in his final years was an image of what we all might be someday — what we all are, in a way, at least sometimes.

But whether you feel it or not, I will say: Just as the coronation of the Queen was an image of something meant for all of humanity, so too her funeral. She has borne the weight faithfully, and she has laid down her burden. Her obsequies then are not just about “the King’s two bodies” but about all of us. If we allow it, Elizabeth can be our representative: made up of “the dust that we are,” but also one who has born the weight of glory for a very long time, and now can rest; now can cast her crown before the King of Kings and Lord of Lords, and then forever be lost in wonder, love, and praise. 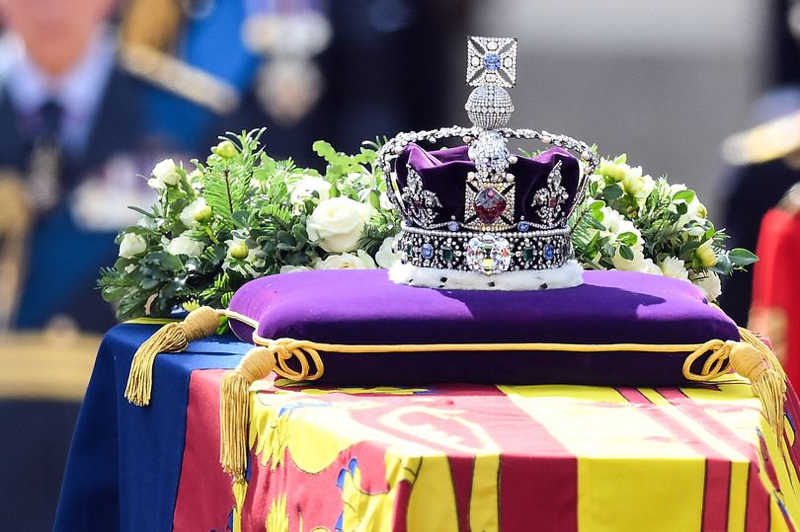