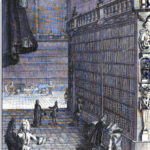 The frontispiece (above) offers a striking visual image of a “comprehensive” organization of knowledge. Extending from the bottom of the page to the top right side is a bookcase filled with books of all shapes and sizes. Its immensity is highlighted by a marked contrast with two much smaller men standing opposite it on the left-hand side of the page. One of the two men, cast in bright light, stands with an outstretched arm gesturing toward the towering shelf of books, whose spines are visible in a single glance. A vaulted ceiling extends across the top of the page and imbues the entire image with a sense of light-filled openness in which everything is illuminated and knowable. This image is a visualization of what Jöcher and Mencken claim their lexicon to be: an accessible, complete, and clear view of the entire scholarly world. It is an image of what eighteenth-century scholars referred to as the “empire of erudition” [Reich der Gelehrsamkeit]––a unified, homogenous realm of knowledge, theoretically accessible to all fellow scholars in print. The lexicon reveals, as though it were pulling back a curtain as suggested in the top left hand corner, an already organized and established set of knowledge.

And yet, this particular image of knowledge or learning is one of book bindings, closed books shelved one beside the other. And the sheer immensity of the bookshelf, how it dwarfs the two men opposite it, is ominous. With the unlimited vertical horizon, the bookshelf could expand infinitely. With every newly published book, it could continue to grow upward, but the two men would be left to gesture in vain toward a accumulating mass of print. Furthermore, the shelf may well be visible, but there is no ladder, no way to actually reach the books. Would its shadow not ultimately obscure those two men gazing skyward? And what was to prevent the bookshelf, teetering under the weight of ever-more print, from tipping over and crushing them?

— Chad Wellmon on “Googling Before Google” — please read it all.