I declared 2021 the Year of Hypomone and 2022 the Year of Repair. I have not ceased to need hypomone — the New Testament word for “patient endurance” — nor are the good things of my world in any less broken. And it seems to me that there’s a close relationship between the two themes, because those who would engage in tikkun olam, the repair of the world, will more than most others require hypomone. But how to get it? How and where to find the resources that enable the patient endurance that in turn enable us to pursue the work of repair? I declare this the Year of Focal Practices.

What do I mean by that? It’s a concept from Albert Borgmann’s seminal 1984 book Technology and the Character of Contemporary Life. As Borgmann’s career moved on he became a clearer and more straightforward writer, but in 1984 … not so much. He was still, then, too Heideggerian to be lucid. So rather than quote I am going to try to summarize, drawing chiefly on chapters 9 and 23.

Focus is a Latin word that means hearth — the fireplace that was both literally and metaphorically the center of the Roman household. Various members of the family were responsible for some element of hearth-maintaining — one would chop or gather the firewood, another bring that wood into the house, another make the fire, another add logs when the fire got low or stir it to enliven it, still another to cook the family’s food over the flame — and each member benefitted from its warmth. The heath was a place for preparing food and for keeping warm; it was therefore also the place where the family gathered, where its unity and wholeness were made manifest. The household gods — the lares and penates — were above all the guardians of the hearth. They preserved and in various ways represented the family’s focus.

Controlled fire is of course the paradigmatic technology: Prometheus’s gift of fire to humans is the definitive extension of our natural abilities, an augmentation of power, a prosthesis. But, Borgmann shows, fire-as-focus is much more than that: it generates a set of focal practices that strengthen the bonds among members of the family. Contrast the hearth at the center of a home to a central heating unit, which instead of binding us to one another invites us to go our separate ways. The central heating unit is not a focus that links us to one another; it is rather a device that facilitates our separation.

The idea that our technological prostheses are meant to generate independence from one another is a way of thinking about technology that Borgmann calls the device paradigm. To summarize an argument I have made here, the device paradigm promises freedom but in fact — after all, it cannot be modified to suit our needs — enforces what Ursula Franklin calls a “culture of compliance.” It is, as Ivan Illich would put it, a manipulatory technology, whereas the hearth is a convivial one.

We have good reasons for installing central heating in our homes, but we miss the hearth and look for ways to replace it. The novelist Kim Stanley Robinson often says that our evolutionary descent predisposes us to be fond of certain actions, like throwing objects at other objects and sitting around a fire telling tales. The latter impulse, he believes, draws us to the movie theater, where we gather in the darkness facing a bright light and enjoy stories — but while that provides a certain form (or simulacrum) of communal connection, it’s the television that becomes the replacement for the family hearth. Here’s a photo I took a few nights ago — I title it Focus One and Two: 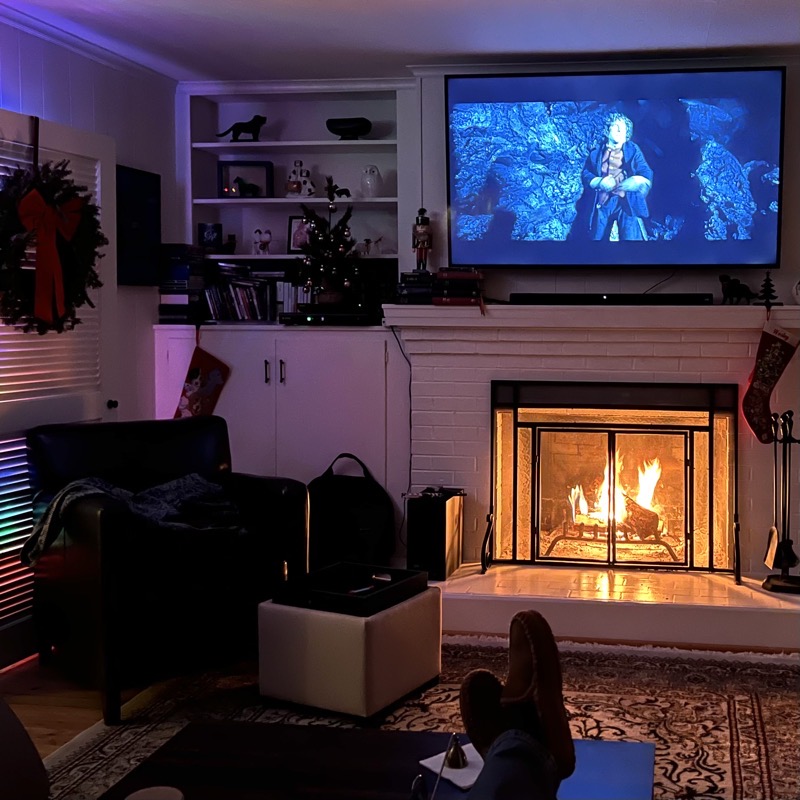 When I decided to put our TV over the fireplace, I didn’t realize the symbolic heft of my decision. But one evening, when I mused that it would be easier to show a fireplace video from YouTube than actually build a fire, all the ironies suddenly came home to me.

Let me be clear: I loved re-watching The Fellowship of the Ring with my family as a fire crackled away in the fireplace. It was truly wonderful. But it was not, in Borgmann’s sense, a focal practice. In fact, I am inclined to think that we could enjoy it as much as we did because of other practices that have bound us as a family, practices that are truly focal.

I am inclined to think that the cultivation of genuinely focal practices — on the familial level and on that of whole communities — is essential to the development of hypomone, and hypomone is essential to the work of repair. I want to think about these matters quite a bit in 2023, and so I have added a “focus” tag to this post — to prompt me to keep thinking and writing on this subject. We’ll see how it goes.