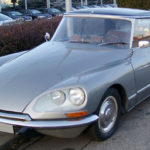 This astonishingly advanced and beautiful car was also known by the punning pronunciation of the initials DS in French as “La Déesse” – the goddess. The philosopher Roland Barthes, who was later killed in a car crash, compared the genius of the design of the Déesse to the building of the great French medieval cathedrals as a supreme expression of the spirit of the age. He mentions the many-spired cathedral of Chartres, an ever-fixed mark to which we steered across the yellow oceans of maize and sunflowers from Rouen, and in which I once spent the night hidden between pews in a sleeping bag. Modern France’s new religion of mobility was all there in the Déesse.

And Barthes was right. The Déesse was a kind of miracle, and a lift in one after a long, dusty vigil in the sun could feel like divine providence. Perched on the Déesse’s sighing white leather seats, hugging our rucksacks, we marvelled at the way the steering wheel appeared to float like a halo, magically suspended by an almost invisible stalk. Shakespeare wrote “My mistress when she walks treads on the ground.” You’d never say that about the Déesse. The car floated, gliding forward effortlessly, having levitated with unhurried dignity from its parked stance, slumped on all fours. You wouldn’t choose a DS for a bank robbery. And there was so much glass. No car had ever been this transparent. Even the headlights swivelled about like two eyes, mysteriously coordinated with the steering, so the Déesse had the uncanny, almost supernatural ability to see round corners at night. The ineffable design still remains outside time, more modern, more confident, than anything that has come since.