to know as I am known (by Apple) 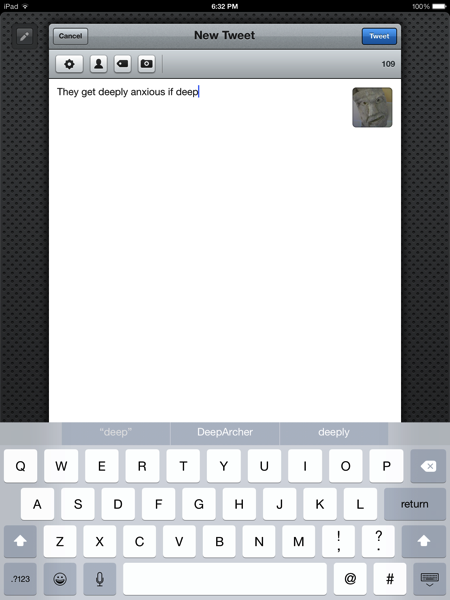 Take a good look at the iOS screenshot above and you’ll see something interesting. Look just above the keyboard, at the row of suggested words — a new feature in iOS 8, though one that has been around a while in Android.
Apple doesn’t just get its suggestions from a universal dictionary. Its description of this “predictive typing” says,

As you type, you’ll see choices of words or phrases you’d probably type next, based on your past conversations and writing style. iOS 8 takes into account the casual style you might use in Messages and the more formal language you probably use in Mail. It also adjusts based on the person you’re communicating with, because your choice of words is likely more laid back with your spouse than with your boss. Your conversation data is kept only on your device, so it’s always private.

The key phrase here is “based on your past conversations” — but it’s not only conversations that Apple is drawing on.
See the word “DeepArcher”? Not a dictionary word. In fact, it’s a recent coinage, from Thomas Pynchon’s 2013 novel Bleeding Edge, where it’s the name of an MMORPG. How did it make its way into a list of “predictions” for my typing?
This is how: I wrote a review of Bleeding Edge. Apple didn’t scan the internet for it, though; rather, a few months ago, I decided to test the “Open in” feature on my iPad, and opened the MS Word version of my review — I always send stuff to editors as .doc files, even though I never actually write anything in Word, and in fact don’t own it — in Pages, Apple’s own word processing application. By opening it in Pages, I saved it to iCloud, and Apple evidently uses all my documents in their cloud, as well as my “conversations” in Messages or in my .me mail (which I don’t use), to create a corpus from which its predictions may be drawn.
Either innocent or creepy, depending on how you think about it. But considering Pynchon’s status as the unquestioned poet laureate of paranoia, there’s something perversely appropriate about that word showing up on my keyboard — and about my surprise when it did.