I tried to read Don DeLillo’s Underworld more than 20 years ago, and got about 500 pages in before I got firmly stuck in the mud. I just now returned to it, and while I managed to cross the finish line this time, my response was very much the same: for the first two-thirds of the book DeLillo weaves a masterful narrative, and then, rather suddenly it seems to me, he loses control of his material – and loses control completely. Part 5 occupies 150 pages and ought to occupy 40; the 125 pages of Part 6 could have been cut by half, or more, with no loss of meaning and considerable gain in narrative momentum. Moreover, certain themes which are central to Parts 1-4 — I think especially of their inquiry into the relationship between civilization and waste — disappear altogether in those two sections, making but a cursory reappearance in the Epilogue. When Lenny Bruce shows up in the novel the whole thing falls apart. Perhaps there’s a lesson in that.

All this makes it very hard to evaluate Underworld. It is in many respects brilliant, but so manifestly undisciplined and misshapen that it dissipates its great power to a degree that I have rarely seen in fiction.

Anyway, on to what I really want to say here.

I’m sure this has been commented on before, but one way to think about this novel is as a central node in an ongoing conversation with Thomas Pynchon. Four examples:

One: Right in the middle of this book DeLillo describes at some length an imaginary film by Sergei Eisenstein. This has a structural and thematic purpose almost identical to that of The Courier’s Tragedy, the imaginary Jacobean drama that occupies a similarly central place in The Crying of Lot 49. In each case the imaginary literary work is a kind of reflection-in-a-distorted-mirror of the book you’re reading.

Two: DeLillo’s description of the Fresh Kills Landfill in Underworld clearly prompts a kind of response from Pynchon in his most recent and probably final novel, Bleeding Edge. DeLillo:

He imagined he was watching the construction of the Great Pyramid at Giza — only this was twenty-five times bigger, with tanker trucks spraying perfumed water on the approach roads. He found the sight inspiring. All this ingenuity and labor, this delicate effort to fit maximum waste into diminishing space. The towers of the World Trade Center were visible in the distance and he sensed a poetic balance between that idea and this one. Bridges, tunnels, scows, tugs, graving docks, container ships, all the great works of transport, trade and linkage were directed in the end to this culminating structure. And the thing was organic, ever growing and shifting, its shape computer-plotted by the day and the hour. In a few years this would be the highest mountain on the Atlantic Coast between Boston and Miami. Brian felt a sting of enlightenment. He looked at all that soaring garbage and knew for the first time what his job was all about. Not engineering or transportation or source reduction. He dealt in human behavior, people’s habits and impulses, their uncontrollable needs and innocent wishes, maybe their passions, certainly their excesses and indulgences but their kindness too, their generosity, and the question was how to keep this mass metabolism from overwhelming us.

Sid kills the running lights and the motor, and they settle in behind Island of Meadows, at the intersection of Fresh and Arthur Kills, toxicity central, the dark focus of Big Apple waste disposal, everything the city has rejected so it can keep on pretending to be itself, and here unexpectedly at the heart of it is this 100 acres of untouched marshland, directly underneath the North Atlantic flyway, sequestered by law from development and dumping, marsh birds sleeping in safety. Which, given the real-estate imperatives running this town, is really, if you want to know, fucking depressing, because how long can it last? How long can any of these innocent critters depend on finding safety around here? It’s exactly the sort of patch that makes a developer’s heart sing — typically, “This Land Is My Land, This Land Also Is My Land.”

Yet there is something moving to Pynchon’s protagonist Maxine about the Island of Meadows, an “unexpected refuge, a piece of the ancient estuary exempt from what happened, what has gone on happening, to the rest of it.” Maybe it won’t last; maybe the developers will get it. But while it lasts, it is beautiful. (Update from 2021: the Fresh Kills Landfill is closed, while the Island of Meadows remains. But … where does the garbage go?)

Three: Underworld begins by attending to a distinct object, a baseball, and ends with a vision of the displacement of the material world by cyberspace, a vision prompted by a random conjunction of names, Sister Alma Edgar and J. Edgar Hoover:

A click, a hit and Sister joins the other Edgar. A fellow celibate and more or less kindred spirit but her biological opposite, her male half, dead these many years. Has he been waiting for this to happen? The bulldog fed, J. Edgar Hoover, the Law’s debased saint, hyperlinked at last to Sister Edgar — a single fluctuating impulse now, a piece of coded information. Everything is connected in the end. Sister and Brother. A fantasy in cyberspace and a way of seeing the other side and a settling of differences that have less to do with gender than with difference itself, all argument, all conflict programmed out. Is cyberspace a thing within the world or is it the other way around? Which contains the other, and how can you tell for sure?

Yes, “everything is connected in the end,” but is the connection revelatory or trivial? Full of occult meaning or just the accident of two identical strings? And in Bleeding Edge, as Maxine reflects on the “unexpected refuge” of the Island of Meadows, she compares it to DeepArcher, a Second Life-style video game and community and wonders whether DeepArcher too is a refuge — or, rather, something equally vulnerable to the depredations of the “developers.” (You may read more by me about these themes here.)

The World Trade Center was under construction, already towering, twin-towering, with cranes tilted at the summits and work elevators sliding up the flanks. She saw it almost everywhere she went. She ate a meal and drank a glass of wine and walked to the rail or ledge and there it usually was, bulked up at the funneled end of the island, and a man stood next to her one evening, early, drinks on the roof of a gallery building—about sixty, she thought, portly and jowled but also sleek in a way, assured and contained and hard-polished, a substantial sort, European. “I think of it as one, not two,” she said. “Even though there are clearly two towers. It’s a single entity, isn’t it?”

“Very terrible thing but you have to look at it, I think.”

(A subtly-handled contrast in DeLillo’s novel opposes the World Trade towers to the Watts Towers, the latter being handmade and non-commercial and radiant with purposive purposelessness.) In Bleeding Edge — published in 2013 and set in 2001 — the Twin Towers have just come down:

“Do you remember that piece of footage on the local news, just as the first tower comes down, woman runs in off the street into a store, just gets the door closed behind her, and here comes this terrible black billowing, ash, debris, sweeping through the streets, gale force past the window . . . that was the moment, Maxi. Not when ‘everything changed.’ When everything was revealed. No grand Zen illumination, but a rush of blackness and death. Showing us exactly what we’ve become, what we’ve been all the time.”

“Is living on borrowed time. Getting away cheap. Never caring about who’s paying for it, who’s starving somewhere else all jammed together so we can have cheap food, a house, a yard in the burbs . . . planetwide, more every day, the payback keeps gathering. And meantime the only help we get from the media is boo hoo the innocent dead. Boo fuckin hoo. You know what? All the dead are innocent. There’s no uninnocent dead.”

Finally: if there’s a better book cover than that of Underworld (from a 1972 photograph by by André Kertész) I don’t know what it is: 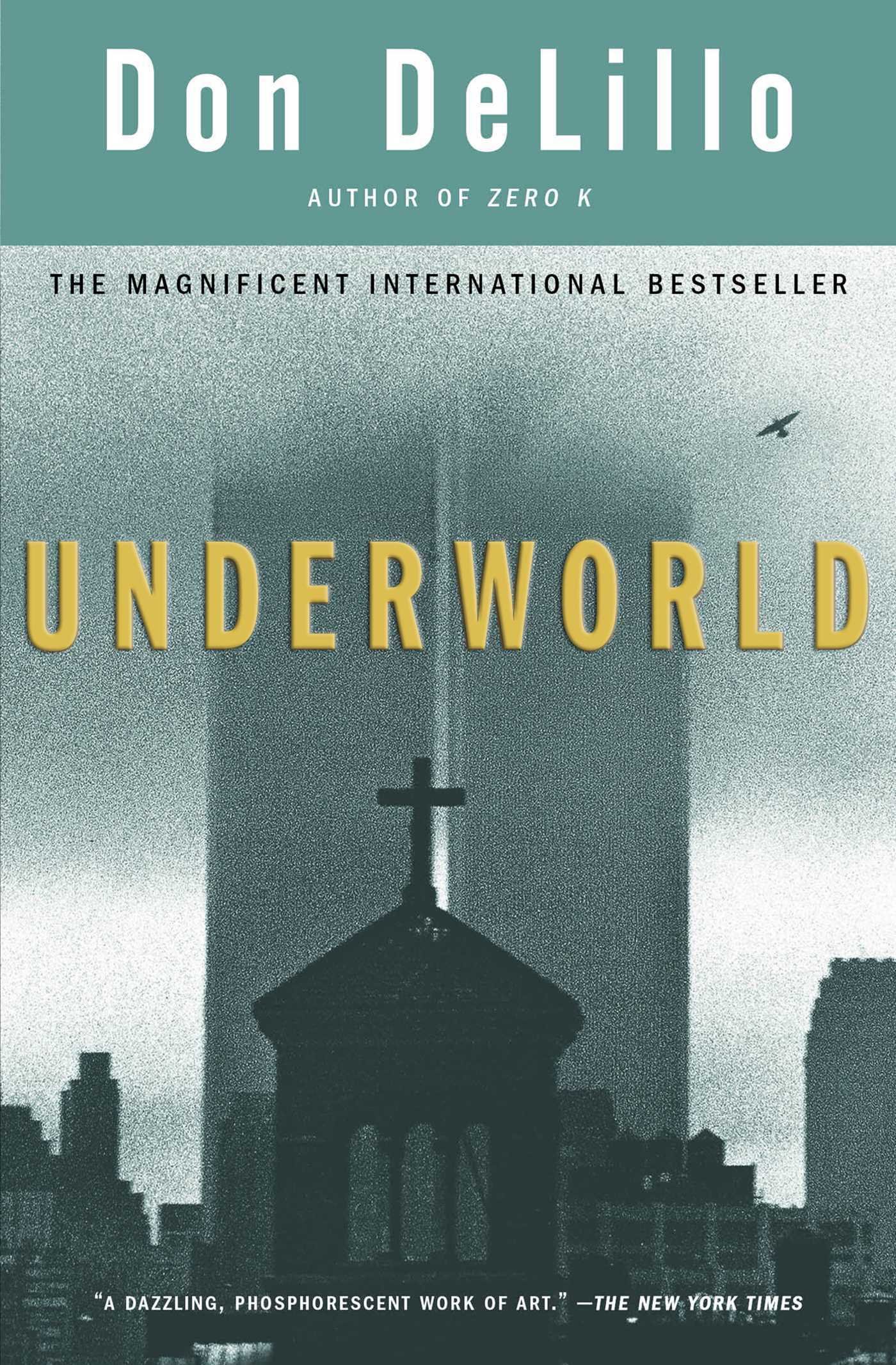