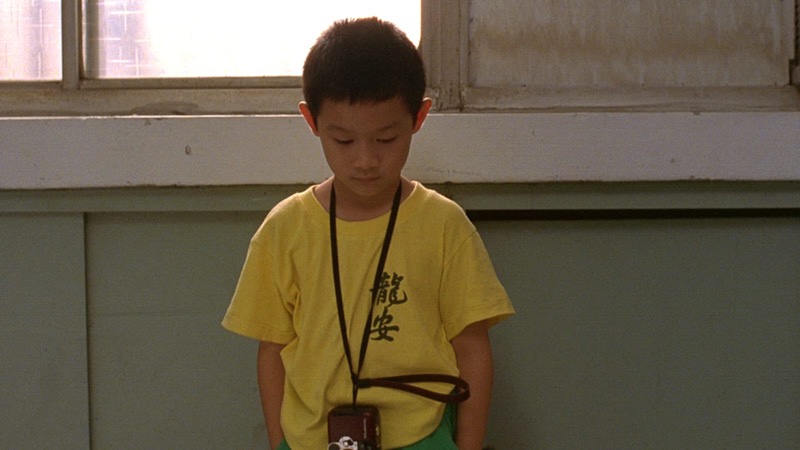 There’s a lot going on in Edward Yang’s masterful Yi Yi (2000), but I just want to focus on one theme here: how an eight-year-old boy named Yang-Yang is confronted by an epistemological conundrum. He realizes, first, that he can’t be sure that other people see what he sees; and second, that he can only know half of the truth about the world, because he can only see what’s in front of him — what’s behind him remains always invisible.

Yang-Yang responds to this difficulty by getting a camera. It takes him a while to learn how to use it properly: at school a teacher confiscates a stack of blurry, uncomposed photos and mocks them as “avant-garde art.” But gradually he gets the hang of his new device, and finds his true subject: the backs of heads — as many of them as he can photograph. Late in the movie he hands his uncle a photo. The uncle is confused at first, but then realizes that it’s the back of his own head. “You can’t see it so I help you,” Yang-Yang says, to which his father replies, “So that’s what this is all about.” (It may not be irrelevant that the uncle is notable for his complete lack of self-knowledge.)

Yang-Yang’s father, NJ, has troubles of his own, including conflict with his co-workers; a wife, Min-Min, who has fallen into deep depression when her stroke-afflicted mother becomes comatose; and the sudden reappearance in his life of his first love, a woman named Sherry. When NJ and Sherry talk we typically see him from behind — we see only the back of his head. What message his face carries is not for us to know.

There is one exception to this rule, though. When Min-Min’s mother is brought home in a coma, the doctors tell the family to speak to her every day. Tell her what they’ve been doing, whatever, but speak to her because maybe — the doctors don’t have much hope of this, but still — maybe that will help bring her back. When they do this we see their faces; the blanket-covered lower body of the unconscious old lady is visible just at the edge of the frame. At one point NJ visits, in the midst of his struggle with what to do about Sherry’s reappearance, and says, in highly general terms, that he’s having a tough time. We see his full face throughout this scene. Also: he comments, “This is like praying, you don’t know whether the person you’re talking to hears you.” But we know she doesn’t see him.

Late in the movie, when Min-Min returns from an extended period of retreat in a Buddhist monastery, she tries to tell NJ what she has learned — and what she has not learned. She sits, distressed, at the foot of their bed, while he sits near the head of it — behind her. He sees only the back of her head; she doesn’t see him at all. Yet they speak words of remarkable honesty to one another; perhaps some things are easier to say when you’re not looking into someone’s eyes. Perhaps also that’s why it can be easier to talk to a comatose person who probably can’t hear you than to talk to an angry or unhappy member of your family.

It’s noteworthy, perhaps, that Yang-Yang shares part of a name with the film’s director, because Edward Yang repeatedly films his characters through glass, in such a way that we see those characters but also reflections in the glass — reflections that show us what is behind the camera. Maybe, then, this is one of the roles of movies: to show us that half of the truth that we don’t ordinarily see, that we’re debarred from seeing. (One teenage character: “My uncle says we live three times as long since man invented movies…. It means movies give us twice what we get from daily life.” I’d like to know his uncle’s name.)