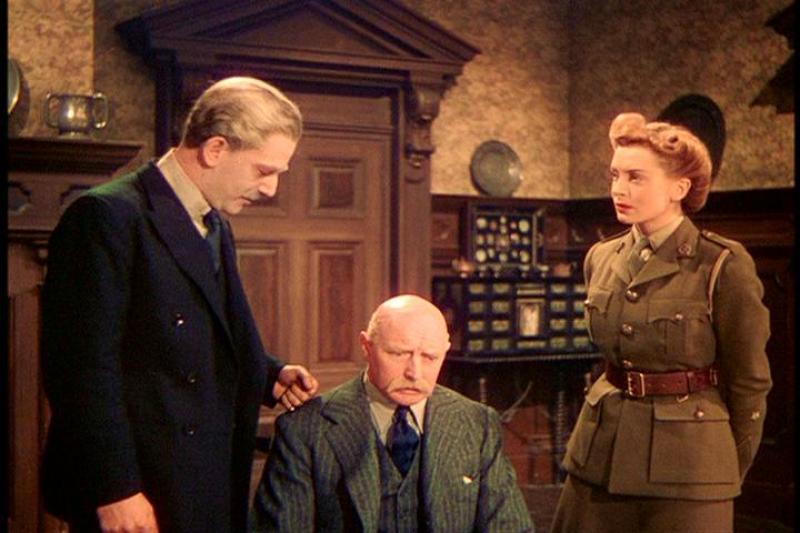 The Life and Death of Colonel Blimp (1943) is an odd movie, because it’s essentially an argument for something it never directly mentions: the bombing of German cities.

It’s divided into three periods: the Boer War, the Great War, and World War II. In each of them our protagonist, Clive Wynne-Candy, is a soldier: first a Lieutenant, then a General, then a retired General working with the Home Guard. In each period his actions are governed by a strong sense of fair play and gentlemanly dignity. The point of the movie, as I see it, is to honor him for that lifelong integrity but to insist that the time for such integrity is over.

The keynote is struck when Theo Kretschmar-Schuldorff, his old friend and one-tome romantic rival, a German driven from his country by his opposition to Nazism, says: “Dear old Clive, this is not a gentleman’s war. This time you’re fighting for your very existence against the most devilish idea ever created by a human brain: Nazism. And if you lose, there won’t be a return match next year; perhaps not even for a hundred years.” Wynne-Candy is repeatedly described as someone for whom war is a game, if a solemn game, and who therefore prides himself on playing by the rules. But when one is faced by an enemy such as the Nazis — an enemy that knows no rules, no laws, no principles — one must throw out the book.

This is the argument also of a young soldier whose mockery of Wynne-Candy sets the movie’s story in motion, and Wynne-Candy ultimately accepts the mockery. He knows, and says, that he cannot change, but he also comes to believe that he must pass the torch to those who are willing and able to fight the Nazis in the same way the Nazis fight. He pledges to take that soldier to dinner, and in the movie’s last scene he salutes him. (Note that Wynne-Candy is not dead: it is all that he has stood for, the Colonel Blimp in him and in England, that has died. But Colonel Blimp here stands not for the blustery jingiosm of the comic but rather for a set of moral standards applied equally in peace and in war.)

We are clearly meant to admire him for his sense of honor, but even more for his awareness of his own superannuation. And then what remains is to do to the cities of Germany what the Nazis have done to London and Coventry. Maybe that position is right and maybe it’s wrong, but there’s no doubt that it’s the position The Life and Death of Colonel Blimp was produced in order to defend.

(It’s noteworthy that Churchill hated the movie, even though it supports the war policy that he himself advocated and carried out. Apparently Churchill didn’t like the idea of a wartime movie with a sympathetic German character, even if the character is fervently anti-Nazi and is played by an Austrian Jew who came to Britain in 1936 to escape Nazism.)