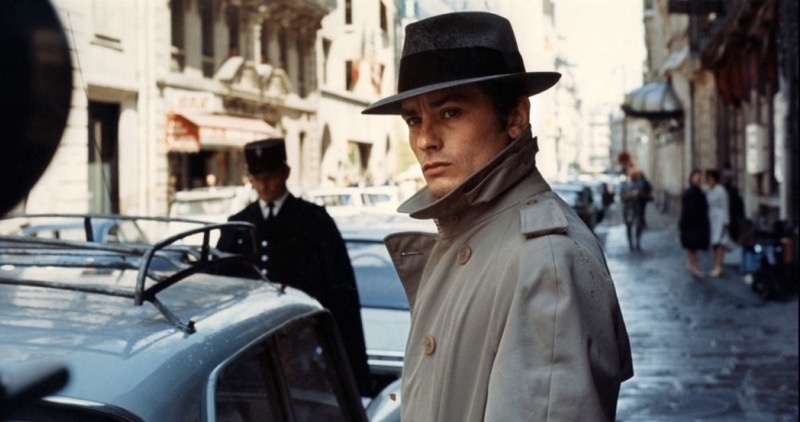 Criterion describes the film thus: “In a career-defining performance, Alain Delon plays Jef Costello, a contract killer with samurai instincts. After carrying out a flawlessly planned hit, Jef finds himself caught between a persistent police investigator and a ruthless employer, and not even his armor of fedora and trench coat can protect him.“ Well … the hit may have been flawlessly planned, but it wasn’t flawlessly executed.

Nothing Jef does is flawlessly executed, and the problems start (and to some extent end) with his choice of clothing: trench coat and fedora. Like Jean-Paul Belmondo’s cheap crook in Breathless — R.I.P. Jean-Luc Godard, by the way — Jef has clearly watched too many Bogart movies. With the partial exception of an older man we see in a police lineup, nobody else in the movie — set in a very Sixties Swinging Paris — dresses remotely like Jef, so he might as well have a spotlight on him everywhere he goes. And then after he has completed his hit he just walks thoughtlessly out of the room and into a hallway where is is immediately seen. Similarly, after each hit he has the license plates changed on his car, but never considers the value of driving a different car. Jef may think he’s a smooth hitman “with samurai instincts,” but he’s really pretty bad at his job.

He only survives as long as it does because (a) the police aren’t very good at their jobs either and (b) the woman who sees him after that first hit, a pianist at the nightclub, tells the police that she doesn’t recognize him — for no reason we are ever told. But eventually his own carelessness — combined, I’m inclined to think, with a desire to die, to be done with the charade — catches up with him anyway.

We can make some guesses about what motivates the pianist who claims not to have seen him, and about why Jef returns to the nightclub to point an empty gun at her; we can try to connect these dots, and others; but we can’t be sure. One of the best things about the movie is its reticence, though not absolute silence, about what’s motivating people. As a character in The Rules of the Game says, “The awful thing about life is this: everyone has their reasons” — but in Le Samourai we never learn what those reasons are. But I don’t think there’s any way to tell the story that makes Jef good at what he does.

Too many viewers of the movie, including critics, take Jef at his own self-valuation, buy into his illusory self-image. Perhaps this is because Alain Delon is so outrageously good-looking. But in any case it’s a mistake. Jef is a young French guy pretending (for whatever reason) to be a Bogartesque hard man, and the story of the movie is how his pretense eventually becomes more than he can sustain.