on The End of the Tour 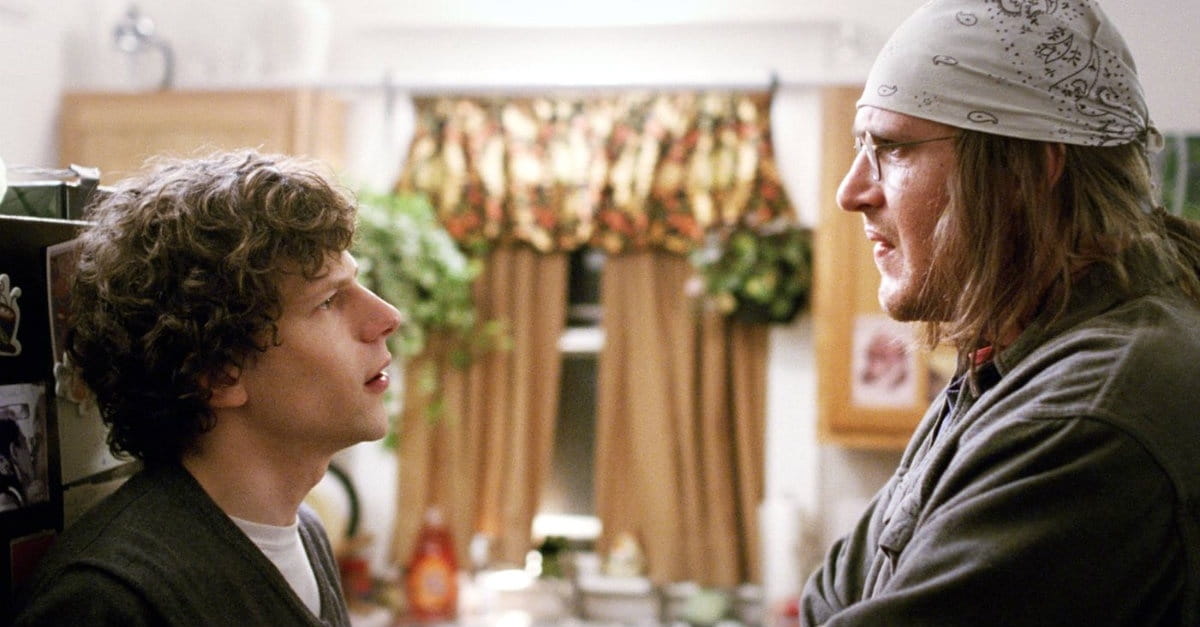 As part of my ongoing reckoning with David Foster Wallace, a writer whose work I have mixed responses to but whom I can’t put out of my mind, I watched The End of the Tour the other night. I have some thoughts.

1) Jesse Eisenberg’s David Lipsky comes off as a little bit of a jerk at times, but far less of one that Lipsky himself does in the book on which the film is based. The real Lipsky seems to want to present himself as someone to be reckoned with, someone who is a better chessplayer than DFW, both literally and metaphorically. He’s always claiming that he perceives DFW’s subtle rhetorical strategies. You don’t hear that kind of thing from Eisenberg’s Lipsky, which is good. You mainly see Lipsky trying to hold his own with DFW, determined not to be overawed, determined (and this is an important element of the movie) not to be physically intimidated on those rare occasions when DFW speaks forcefully. DFW was about 6’2″, but Jason Segel is taller than that, and bigger-framed, and the size differential between him and the petite Eisenberg is key to the way the story plays out. Lipsky tries to seize control of the situation by chutzpah and agility, to take advantage, in a not-especially-malicious way, of DFW’s neuroses, but sometimes he pushes a little too hard and DFW becomes testy and seems to increase in size and Lipsky flinches — but doesn’t back off. (And yes, chutzpah: we’re meant to be aware that DFW is a midwestern WASP and Lipsky is a New York Jew.)

2) Jason Segel is really fantastic, way better than I thought he would be, but he doesn’t quite play DFW as he was at that time. The real DFW, if things like the Charlie Rose interview from 1996 are anything to go by — and in his comments on preparing for the role Segel always mentions that interview — was a little bit more of a smartass then Seigel’s DFW, a faster talker, a guy who seemed wired all the time, a guy whose neurotic mania is right on the surface. Mary Karr, who dated Wallace in the pre-Infinite Jest years, once said (and in his book Lipsky quotes this): “Data went into his mind, and it would just shoot off sparks. Wildly funny, unbelievable wattage, such a massive interest in and curiosity about his place in the world. He had more frames per second than the rest of us, he just never stopped. He was just constantly devouring the universe.” That “more frames per second” image is brilliant, and watching him talk with Charlie Rose you see it.

You also see the nervous tics, the intense and nearly-disabling self-consciousness. When DFW says something less perfectly than he wants to, he grimaces and drinks more water. Throughout the show he sips and sips and sips. When Rose asks him to explain all the endnotes in Jest his hyperarticulacy falters, he stumbles, he mutters to himself, and then says:

ROSE: Why — quit worrying about how you’re going to look and just be!

DFW: I have got news for you. Coming on a television show stimulates your what-am-I-going-to-look-like gland like no other experience.

You don’t get so much of the high-speed processing with Segel, just the self-consciousness which verges at times on self-disgust. You don’t get the smartest-guy-in-the-room vibe, which was clearly very much a part of DFW at that point in his life. Ten years later that had got sanded down and he was far less manic, and in fact the pace and tone of Segel’s DFW is closer to the guy who gave the “This Is Water” speech in 2005 than to the Wallace of 1996. But nevertheless the performance works. It really works. It’s impossible not to be touched by this guy, so smart and so successful and yet so unsure about himself. (Though I do wonder how much of that comes across to people who haven’t read anything by or about DFW.)

3) There’s a really great scene at the end when Lipsky is going through DFW’s house and describing for his tape recorder whatever he sees. (It’s in the book that way too.) And I love how that Jesse Eisenberg plays the moment when he sees the prayer of Saint Ignatius, and just reads it to his tape recorder.

Lord, teach me to be generous.
Teach me to serve You as You deserve;
to give and not to count the cost, […]
to toil and not to seek for rest,
to labor and not to ask for reward,
save that of knowing that I do Your will.

He’s obviously puzzled by it, doesn’t know what to make of it, but he has a very small window of time in which to record his impressions. He just stares at it a moment and then clicks off his recorder. It’s noteworthy that the prayer appears in the book too, in the same scene, but Lipsky quotes less of it and merely comments that it reminds him of “the AA prayer” (i.e. the Serenity Prayer). Donald Margulies, the writer of The End of the Tour, and James Ponsoldt, the director, seem to realize that it deserves more attention.

Yet there’s another similarly interesting moment from the book that the film treats more briefly. In the film, just before the tape-recorded survey of the house, DFW mentions that he likes going to dances at a local Baptist church. But in the book, he specifies that it’s a “black Baptist church,” and adds: “There’s a few of us who go to this, there’s this church up near campus, and that church is kind of good friends with this black Baptist church.” A slightly indirect confession that he is a churchgoer. (It was a Mennonite church, as it happens.)

There are a good many Christians for whom DFW has become a kind of saint, a secular saint maybe but nevertheless One of Us, but he really wasn’t. He was someone who clearly wanted the consolations of faith but equally clearly was not able to achieve them, at least not consistently. That his tenuous connection to faith would be represented in the movie in these two tiny things that emerge near the end, the Saint Ignatius prayer and the time he spends dancing at the Baptist Church, seems to me very appropriate. They are little mysteries which neither Lipsky nor we can see the full significance of. And I think that’s the way it was with DFW in general. So much going on on the surface, and yet so much more invisible, lurking deep below.