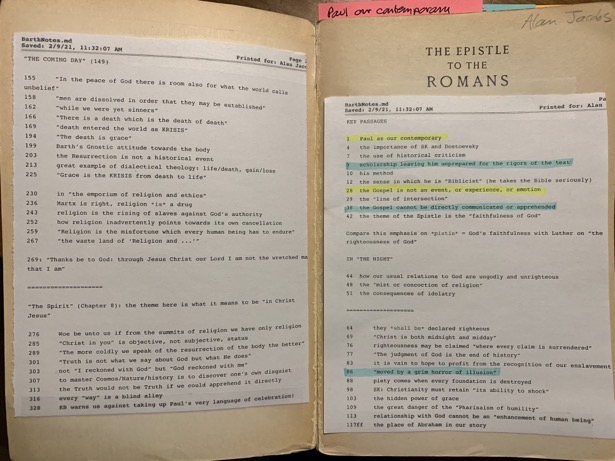 (The inside front flap of my old and much-used copy of Barth’s commentary on Romans.)

This is a story well known to many, but it’s worth recalling.

When Karl Barth was a young pastor in Switzerland and the Great War had recently begun, he read the “Manifesto of 93,” in which a large number of German scholars in the arts and sciences loudly denounced the claims made in the Allied nations that Germany had in any way been an aggressor in the current war, and pledged themselves to the service of German nationalism. Barth was appalled. And he was especially appalled when he saw how many of the signatories were his former teachers, in theology and biblical studies. He had already distanced himself to some degree from the easy comforts of 19th-century liberal Protestant theology, in which Christianity was a pleasant and useful addendum to a confident humanism. But at this point Barth began to ask whether there might be a substantive — a causal — relation between these professors’ theology and their embrace of German nationalism.

As he was reflecting on these matters, he found himself faced with the task of preaching some sermons on Paul’s letter to the Romans. And in preparing to deliver those sermons, he gradually came to see that the most powerful imaginable explanation for the behavior of his former teachers was to be found in the letters of Paul, and especially this one, the longest and greatest of Paul’s letters.

It was suddenly quite clear to Barth what had happened to his teachers: they had domesticated and trivialized the God of Scripture, they had made him no more than an appendage to a humanistic project that was going to go on whether God supported it or not. And this domesticated God quickly and easily gave way to another God who made greater demands upon its adherents: German nationalism. Having made the Christian God so much smaller, these theologians and biblical scholars prostrated themselves before the demands of the powerful god of German military might and cultural superiority.

It was at this point that Barth returned to his reading of Paul with increased urgency. In his preface to the commentary that eventually emerged, just as the war had ended, Barth said that historical scholarship could certainly show the ways in which Paul was a figure of his own time. But what historical scholarship could not show, and what was absolutely necessary to be seen, was that Paul is our contemporary: he speaks to us from the heart of our experience. And in so speaking, he crushes our idols. To hear Paul as a contemporary became Barth’s great project and challenge — and when he had done so, he had a direction for his theology, a direction he would pursue for the rest of his life.

I cannot imagine anything more salutary for American Christians today, on the left and on the right, politically and theologically, than a genuine and unguarded encounter with this terrifying figure we call Paul the apostle.