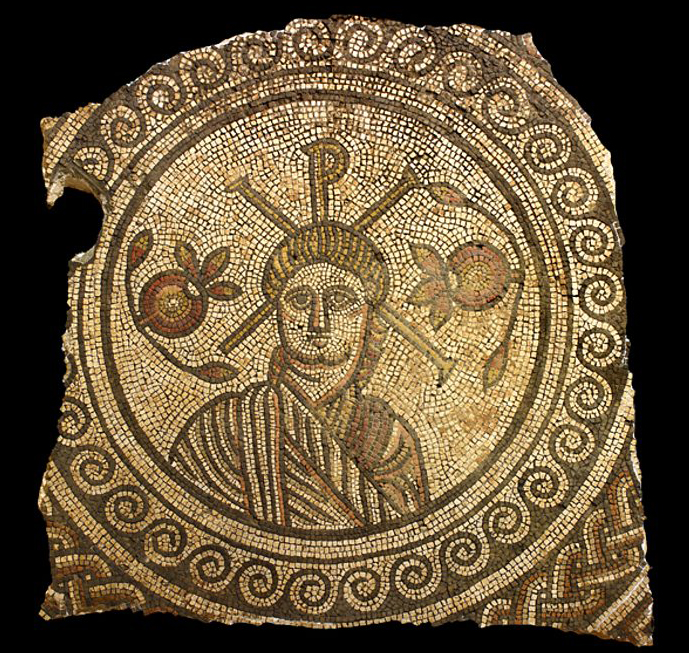 There’s the Hinton St Mary Mosaic – an early Romano-British representation of Christ, with the Chi-Ro symbol monogrammed behind his head, clearly modelled in some ways on images of the sun god, indebted a bit to images of royal authority.

At the same time, this is someone wearing a very simple costume, and when you see something similar in mosaics of later on, very clearly dressed as a philosopher, a wandering teacher. The plain tunic around the shoulder and the unfashionable long hair and beard of philosopher or sage. [RW raises eyebrows. Audience laughter.]

The point being, when you go into one of the great basilicas of the late Roman empire and you see a mosaic of Christ enthroned at the far end, you’re looking at the place where the emperor would sit. And the emperor would be sitting there either dressed in his armour or in cloth of gold with a diadem around his head.

So you’re looking to the throne, but who’s on it? This rather curious and disreputable wandering teacher. So you have a bit of a paradox in visual form there. The person who holds the emperor’s authority in cosmic terms isn’t just another soldier or administrator in uniform, but a philosopher, a sage. So something’s being said there that is on the edge of paradox. It’s been suggested, quite credibly, that some of that tradition of representing Jesus borrows from the ways in which late Classical art used to depict Plato the philosopher or Homer the poet. So it’s a poet, a philosopher, it’s a wordsmith who’s sitting on the throne.