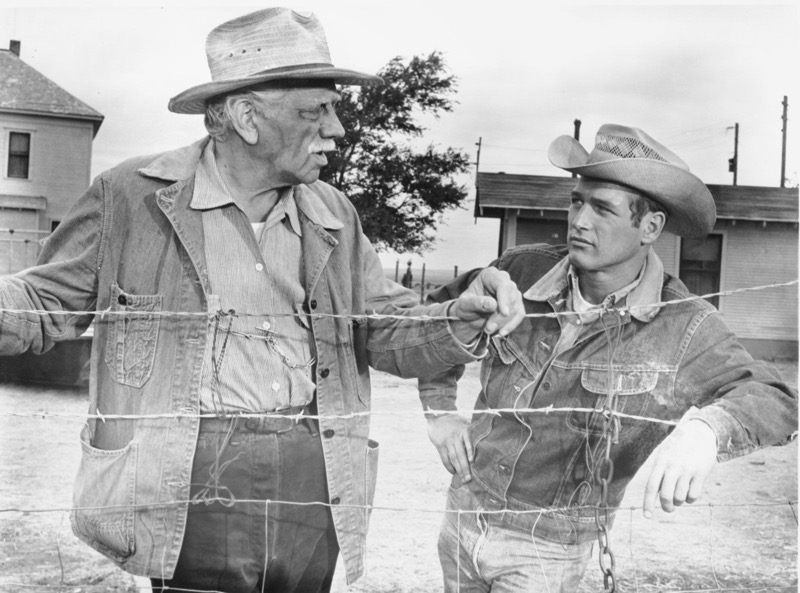 In an earlier post I talked about how good Pauline Kael’s early film criticism — her pre-New Yorker writing — is, and another fine example comes from a long essay she wrote in 1964 for Film Quarterly about Hud. Well, about Hud, yes, but even more about the critical response to Hud.

For instance, she noted this take by Bosley Crowther in The New York Times:

The human elements are simply Hud, the focal character, with his aging father, a firm and high-principled cattleman, on one hand, and Hud’s 17-year-old nephew, a still-growing and impressionable boy, on the other. The conflict is simply a matter of determining which older man will inspire the boy. Will it be the grandfather with his fine traditions or the uncle with his crudities and greed? It would not be proper to tell which influence prevails. Nor is that answer essential to the clarification of this film. The striking, important thing about it is the clarity with which it unreels.

The moral clarity is key to Crowther, and to several other reviewers quoted by Kael. What they like is how unambiguously the movie affirms the archaic moral standards upheld by Hud’s father Homer, and consequently rejects Hud’s selfishness and immaturity.

Dwight Macdonald, writing in Esquire, hated the film for the very reasons that the much larger crowd represented by Crowther loved it:

The giveaway is Hud’s father, the stern patriarch who loves The Good Earth, the stiff-necked anachronism in a degenerate age of pleasure-seeking, corner-cutting, greed for money, etc. — in short, these present United States. How often has Hollywood (where these traits are perhaps even more pronounced than in the rest of the nation) preached this sermon, which combines maximum moral fervor with minimum practical damage; no one really wants to return to the soil and give up all those Caddies, TV sets and smart angles, so we can all agree to his vague jeremiad with a pious, “True, true, what a pity!” In Mr. Ritt’s morality play, it is poor Hud who is forced by the script to openly practice the actual as against the mythical American Way of Life and it is he who must bear all our shame and guilt.

Kael’s view — and does she ever delight in proclaiming it — is that everyone is wrong. They’re wrong because Hud is “one of the few entertaining American movies released in 1963 and just possibly the most completely schizoid movie produced anywhere anytime.” Indeed, it is entertaining because it’s schizoid. It is internally divided because it both hates Hud and loves him, repudiates him and affirms him; and the audience shares in this complex of emotions, because the audience is America, and this tension between the upholding of “traditional values” and the relentless pursuit of self-gratification is maybe the single most essential element of the American character.

I think this reading is compelling. But I also want to set it … not against, but rather alongside a slightly different one: If the audience loves and affirms Hud, might that be not so much because it identifies with Hud’s selfishness but rather because Hud is played by Paul Newman? Men-want-to-be-him-and-women-want-to-be-with-him Paul Newman? There is something about the charisma of a real movie star that shapes our responses in ways that we can’t altogether control.

I wonder if Kael doesn’t fall for this charisma, to some extent. Now, to be sure, Kael believed in the sexual liberation of women long before it was cool to do so, and we were in 1964 on the cusp of a culture-wide sexual revolution; but even so, it’s strange to hear her question whether Hud’s attempt to force Alma to have sex with him should really be called “rape.” Kael’s logic is that Alma is sexually attracted to Hud and is only resisting him because she wants an “emotional commitment,” so if he forced himself on her he would be giving her something she actually wants — ergo, not rape. (So No means Yes, here as in the minds of thousands of frat boys who think that if any woman is drunk that makes them Paul Newman.) I wonder if Kael would have made this particular argument if Hud had been played by a less gorgeous actor.

Whether or not the movie has the universal clarity that Crowther attributes to it, it seems pretty clear about this business. In his last conversation with Alma, Hud calls his attempt to rape her a “little ruckus,” and declares, “I don’t usually get rough with my women. I generally don’t have to.” Well, we learned what he does when he thinks he has to, didn’t we?

But charisma and beauty may not be the only forces at work in shaping our response to someone like Hud — there’s also the simple power of putting someone at the center of our attention, especially if that person can act well. Think of how Breaking Bad did everything it could possibly do to reveal Walter White’s transformation into an utter monster, yet, nevertheless, #TeamWalt was a huge thing on social media. And not because Bryan Cranston was presented to us as sexually alluring.

Another example: when Bertolt Brecht wrote Mother Courage and her Children, a play about a camp follower in the Thirty Years War who through her limitless greed endangers and ultimately destroys her children, he was shocked by the response of the first audiences of the play. Mother Courage is a kind of exemplar of capitalism, and her story is meant to demonstrate the ways that capitalism feeds on war. But of course capitalism doesn’t consciously and intentionally set out to destroy human beings; Brecht was too honest an artist to suggest that, so he certainly wasn’t going to make Mother Courage a slavering child-murderer. She is shocked and genuinely grieved when her children die, and doesn’t realize her complicity in their deaths. So when Therese Giehse, in playing the part of Mother Courage, cried out in her grief at the death of her sons, the audience was so moved that all they felt at the end of the play was was pity for the poor woman who had been deprived of her children. This both surprised and infuriated Brecht, who thought that it was perfectly apparent that her insatiable greed and consequent thoughtlessness towards everything else had led to the children’s deaths, so he rewrote the play to make an already obvious message even more obvious. Unmistakable, unmissable. And when the audience saw this new version of the play, they thought: Poor woman, her children are dead!